Digoxin is an atrial fibrillation (AF) rate control drug that is still in use. New randomized trial data comparing digoxin with other agents is unlikely to become available, but observational data exists in the form of large patient databases. We compared the mortality rates between Digoxin and Diltiazem using the Cerner Healthfacts Data. The study was performed on data with 52,775 U.S. patients with atrial fibrillation. The goal of the study was to assess the mortality versus survival rates between patients. Patients’ characteristics were reviewed among those receiving either a calcium channel antagonist (diltiazem) or digoxin. The mortality rates for patients who took digoxin were greater than that of patients who took diltiazem and had 1.31 times the risk of mortality [5.23% vs 3.98%, RR 1.31, CI 1.21-1.42, p < 0.001]. African Americans had the highest mortality rate compared to other races [6.28%, p< 0.0001]. The age (in years) of patients treated with digoxin was higher than that of patients treated with diltiazem [74.96 vs 68.45, p<0.0001]. Length of stay (in days) of patients with digoxin was also significantly higher than that of diltiazem patients [74.96 vs 68.45, p<0.0001; 5.95 vs 4.99, p<0.0001]. Within certain races, digoxin mortality rates were higher between male and female patients. The mortality rate differences show adverse outcomes and increased risk of mortality was found in patients taking digoxin.

Digoxin is one of the oldest cardiovascular medicines in use today, being first adapted from the foxglove (digitalis lanata) plant in the 18th century by Dr. William Withering and utilized to treat heart failure symptoms.1 It is used as an agent to control heart rhythm in patients with atrial fibrillation (AF). It is one of the first heart failure treatments shown to reduce hospitalizations in patients with reduced ejection fractions of ≤45%.2 As a ventricular rate controller, Digoxin has enjoyed a longstanding place in the management of atrial fibrillation as a rate-controlling agent. However, its performance in use for rate reduction in acute atrial fibrillation is poor,3 but it remains an acceptable rate controlling agent for atrial fibrillation in the setting of heart failure with reduced ejection fractions below 40%.4 Digoxin’s efficacy as a rate controlling agent appears to be enhanced by the concomitant use with beta-adrenergic antagonists.5 In the digitalis investigation group (DIG),6 the largest randomized controlled trial to evaluate heart failure mortality and hospital readmission with digoxin use, higher mortality was seen with elevated serum digoxin concentrations; however, lower overall hospitalization rates were also observed. The DIG trial helps define the role of digoxin plays in patients with heart failure and an ejection fraction less than 45%. In a post-hoc analysis of the atrial fibrillation follow-up investigation of rhythm management (AFFIRM) study by Olshansky and colleagues, propensity matched patients all had elevated risks of both all-cause and arrhythmic mortality with digoxin use.7 While no randomized controlled trial data appear to clearly define digoxin’s role in the heart failure with reduced ejection fraction (HFrF) population with atrial fibrillation (AF), a large meta-analysis was recently completed in 2015.8 This comprised data from 621,845 patients, albeit with limited data on cardiovascular mortality. They report the tendency for increased cardiovascular mortality seen with some observational studies9-11 with a tendency for other trial data to suggest a neutral effect on mortality.12-14

Data source and preparation: This study uses the Cerner Healthfacts data comprising of 52,775 patients who were diagnosed with AF (ICD-9 CM 427.31). The patients were filtered based on the generic name of the drugs. Only patients who took either digoxin or diltiazem during their visit were considered in the data set. Later the data was cleaned carefully by analyzing patients with discrepancies in gender, race, and other demographic variables. There were a few patients who took both digoxin and diltiazem in the data set. These patients were removed from our study because the scope of the study is only to compare the two drugs separately and not to test the interaction effect. The data was then subject to intensive cleaning where the records with missing demographic information were removed, after intensive cleaning the mortality rates were calculated based on the patients who were marked as “Expired” in the discharge description of the data. Variables with too many levels were subjected to reduction of levels. The mortality rates were then compared between the patients who took one of the two drugs.

Statistical Analysis: TThe mortality rates for each of the drugs were compared using Chi-Sq test. Individual comparisons were done between gender, race, and combinations of race and gender for the two drugs. The relative risk estimates were recorded between the people who expired and survived. For lower sample sizes Fisher’s exact test was used. The significance was determined using the p-value cut off of 0.05. SAS® 9.4 was used to perform the data cleaning and the statistical tests. 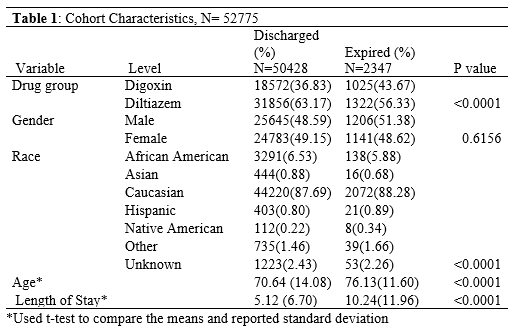 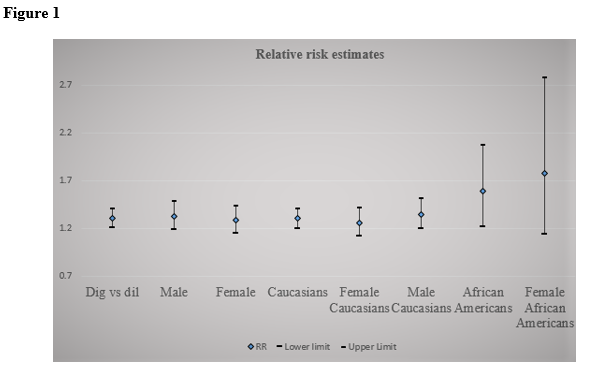 The analysis continues the work into the efficacy of digoxin in the treatment of atrial fibrillation and expands upon it by investigating if gender or race has an effect on mortality rates of patients treated with digoxin compared to patients treated with diltiazem. Our research demonstrates that mortality was higher in patients treated with digoxin. This is consistent with other studies investigating digoxin including secondary analysis from the AFFIRM study and ARTISTOTLE study.16-17 The increased overall mortality rate for digoxin patients is also consistent with the meta-analysis conducted by Vamos et al.18 In addition, the AFFIRM study demonstrated that regardless of gender digoxin mortality was higher and likewise, the research presented in this paper also confirms that regardless of gender that digoxin mortality is higher.

There are studies that find the use of digoxin does not have an increased association with mortality. Allen et.al found there is a neutral association between digoxin and outcomes amongst patients with atrial fibrillation.19 In addition, the Stockholm Cohort study found that digoxin is not associated with mortality, and the reason for the increased rate of mortality in digoxin is that patients tend to be older and frailer.20 The research in this paper examines race and gender to see possible reasons for mortality rate variation. The research presented in this study shows it is evident that Caucasians with atrial fibrillation treated with digoxin have a higher mortality rate regardless of gender. In addition, African American females treated with digoxin have a higher mortality rate. African American males also have a higher mortality rate, however the value was not statistically significant. The data is consistent with the study done by Adedinsewo et.al, which found that digoxin use in African Americans lead to increased mortality rates.21

For Caucasians and African American, the research is consistent with current American College of Cardiology guidelines that diltiazem is a better choice than digoxin for the treatment of atrial fibrillation.23 The results of the analysis suggest that more investigation needs to be done to analyze if gender in Hispanic and Asian populations plays a role in the mortality rate of patients treated with digoxin compared to diltiazem. As the use of digoxin continues to decline in healthcare practices, it is worthwhile to continue to examine if gender or race play a role in the efficacy of digoxin. This key question could unlock the therapeutic value of digoxin and allow physicians to utilize it to its maximal potential. This study mainly focuses on AF patients, but some of the studies considered AF patients with heart failure. It might be critical to analyze if difference in drug treatments for patients with heart failure have different mortality rates. Due to the limitations in EHR data, the reason for death is unknown for the study population which might yield more insights on drug treatments.

We used a large EHR data to analyze the effectiveness of administering Digoxin and Diltiazem. Among the patients with AF in the Cerner Healthfacts data, digoxin associated mortality was significantly higher than that of diltiazem associated mortality. There were no significant difference in digoxin and diltiazem mortality rates between male and female patients. Data from large EHR databases can be an effective way of analyzing efficacy of drugs. This study reflected the concerns raised for the use of Digoxin by many studies using a large observational data.

1. Withering W. An account of the foxglove and some of its medical uses, with practical remarks on dropsy, and other diseases. In Willins FA, Keys TE, eds. Classics of Cardiology. Volume I. New York, NY: Henry Schuman, Dover Publications; 1941: 231–252.

2. Digitalis Investigation Group. The effect of digoxin on mortality and morbidity in patients with heart failure. New England Journal of Medicine. 1997 Feb 20;336 (8):525-33.

6. Digitalis Investigation Group. The effect of digoxin on mortality and morbidity in patients with heart failure. New England Journal of Medicine. 1997 Feb 20;336(8):525-33.

We would like to acknowledge Dr. Jim Hess, Chair of Health Care Administration, Oklahoma State University Center for Health Sciences, for reviewing the manuscript. The research culminating in this publication was supported by the Center for Health Systems Innovation