Abstract
Although obesity is an ongoing healthcare challenge in the U.S., diet and exercise have limited efficacy in losing weight and maintaining the weight loss, particularly for post-menopausal women. Nonetheless, few preclinical studies focus on females, even though it is well-known that rats rapidly gain weight after ovariectomy. To evaluate the effect of exercise on weight gain, we gave one group of ovariectomized (OVX) rats access to running wheels for three weeks immediately after ovariectomy; a second group had access to running wheels that was delayed for three weeks after ovariectomy. We also investigated the effect of exercise on circulating metabolic hormones that communicate with the central nervous system (CNS), as well as on neuroimmune factors in CNS areas involved in the control of body weight. Body weight was assessed each week for six weeks, and circulating levels of metabolic hormones and central neuroimmune factors were assessed after six weeks. Regardless of whether exercise was initiated immediately or was delayed for three weeks, OVX rats gained weight at a slower rate during the first week of running. However, this transient effect was longer-lasting when running was delayed. Circulating insulin and leptin were decreased in OVX rats when running was delayed; hindbrain astrocyte activation and toll-like receptor 4 levels also were reduced. Thus, although adaptations to voluntary exercise may limit its efficacy as a weight loss strategy, even transient slowing of post-ovariectomy weight gain is associated with reductions in metabolic hormones, which may be related to region-specific modulation of central neuroimmune factors.

Introduction
In the United States, ~40% of adults are obese1,2, with ~7% classified as morbidly obese3. Obesity is associated with a range of co-morbidities, including type 2 diabetes, stroke, heart disease, kidney disease, and cancer1,3. The associated medical costs are staggering: people with obesity are estimated to pay as much as $2,700 more in health care costs annually compared to normal weight individuals4. Managing obesity remains a challenge, in part, because diet and exercise, the most common recommendations for obese individuals1, typically result in only short-lived weight loss5,6. Further complicating the issue is that obesity is a multi-faceted disease that is influenced by genetics and the environment. For example, obesity disproportionately affects African Americans, Hispanics, and groups with lower education and socioeconomic status1,2. Moreover, more women are obese compared to men (38.0% vs. 41.5%2), with a further increase in obesity in post-menopausal women2,7. The increase in obesity after menopause is particularly troubling given the aging of the U.S. population. Surprisingly, obesity research has largely focused on males and this sex bias extends to preclinical studies involving animal models. Most of these studies preferentially use younger animals, further limiting their applicability to understanding and managing obesity in post-menopausal women.
Female rats rapidly and reliably gain weight after ovariectomy8,9 and the weight gain follows a predictable time course10. A variety of mechanisms likely contributes to this body weight gain11, among which are peripheral signals associated with eating and body weight including metabolic hormones such as leptin and insulin11. These hormones have actions at receptors localized to the hypothalamic arcuate (ARC) and paraventricular (PVN) nuclei12-13, and the hindbrain dorsal vagal complex (DVC), central nervous system (CNS) areas that studies of male rodents have shown to be involved in body weight regulation and control of feeding14-16. In our recent study, we found that weight gain in OVX rats is associated with changes in chemokine and cytokine expression in the ARC, PVN, and DVC10, suggesting that reproductive hormones also alter central neuroimmune mechanisms that impact body weight regulation. Notably, these changes in neuroimmune signals followed a temporal pattern, with some occurring early during the post-ovariectomy weight gain, and others not evident until the rate of weight gain had slowed.
Taken together, these findings raise the possibility that strategies like exercise, commonly used to manage body weight, may be differentially effective depending on the time at which the strategies are initiated, and on their impact on metabolic hormones which, in turn, may affect neuroimmune signals. Accordingly, in the current studies, we introduced voluntary exercise at different times after ovariectomy to evaluate the impact on post-ovariectomy weight gain and on peripheral metabolic hormone levels. At the same time, we conducted preliminary assessments of central neuroimmune factors to determine whether central neuroimmune signals in ovariectomized (OVX) rats are modified by voluntary running and/or changes in metabolic hormones, and whether the timing of initiating exercise alters these effects.


Materials and Methods
Animals
Adult female Sprague-Dawley rats (90 days; Charles River) were individually housed in a temperature-controlled room (21-25℃) in animal facilities at the Oklahoma State University-Center for Health Sciences (OSU-CHS) on a 12:12 light/dark cycle (lights on at 07:00), with unlimited access to standard rodent chow and water. All procedures were approved by the OSU-CHS Animal Care and Use Committee and were conducted in accordance with the National Institutes of Health Guide for the Care and Use of Laboratory Animals.

Experimental Procedures
After seven days of acclimation to the colony room, rats (n=16) were treated with the long-lasting analgesic, meloxicam (1.5 mg/kg, i.o.) before anesthesia with isoflurane. Bupivacaine was applied topically, the abdomen was incised, the ovaries were removed, and muscle and skin then were closed; ~18 h later, bupivacaine was applied to the incision site. Rats were allowed to recover for an additional 24 h. Body weights of rats were recorded immediately prior to ovariectomy, and then at weekly intervals for a total of six weeks. Change in body weight was calculated each week as [weight (g) for current week - weight (g) for previous week].
During the first three weeks, one group of rats (n=8) was individually housed in standard cages (44 × 22 × 20 cm). The other group (n=8) had 24 h/day access to 35 cm-diameter running wheels (Lafayette Instruments) attached to individual plexiglass cages (47 × 37 × 20 cm). Running distance data were collected using electronic counters linked to a personal computer with Lafayette Instruments software.
After the first three weeks, the groups were switched, and rats that initially had access to running wheels were housed in standard cages (R-S), while rats that initially were housed in standard cages then were housed in cages with attached running wheels (S-R). This phase lasted another three weeks. Thus, all rats had three weeks of voluntary exercise, with the R-S group given access to running wheels immediately after ovariectomy and the S-R group given access beginning three weeks after ovariectomy.


Tissue Collection and Preparation
After 6 weeks, all rats were rendered unconscious by CO2 inhalation and rapidly decapitated. Trunk blood was collected on ice, then centrifuged. Plasma was collected and stored at -80℃ until assayed for total protein concentration and levels of insulin and leptin. Brains and spleens were collected on ice. Brains were stored at -80℃ until processed for determination of neuroimmune factors. 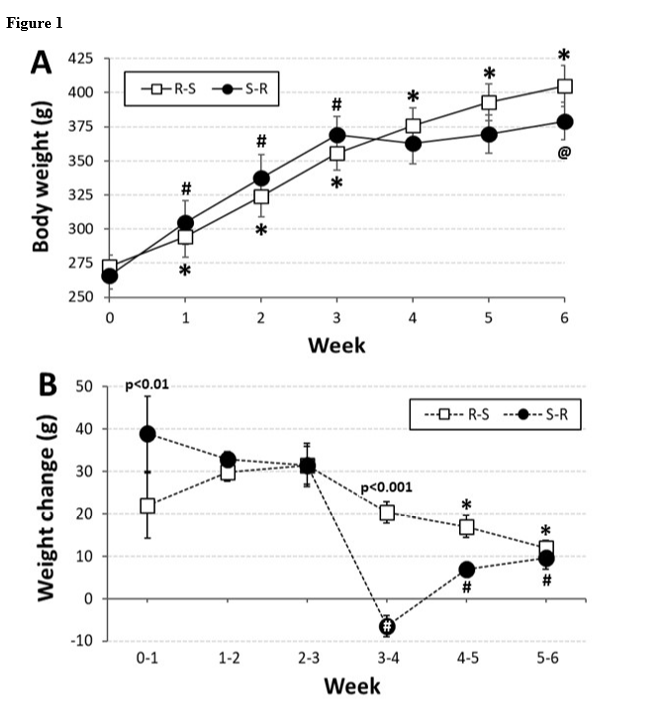 Evaluation of the change in body weight from week to week (Figure 1B) also revealed differences that depended on the interaction between group and week [F(5,70) = 5.21, p<0.001; pȠ2 = 0.271]. Pairwise comparisons of this interaction showed that the R-S group, which ran immediately after ovariectomy, had a consistent weight gain each week, though the gain during the 2nd and 3rd week (while running) both were greater than those during the last 2 weeks (while sedentary; ps<0.05-0.01). The S-R group, which ran after a 3-week delay, also had a consistent weight gain during the first 3 weeks (while sedentary); however, they lost weight during the first week after the switch (while running; ps<0.001, 0.05 vs. all other weeks). For this group, the weight gain during the last 2 weeks were significantly less than the first 3 weeks, but were not different from each other. Finally, during the first week, the R-S group gained significantly less weight (p<0.01), than did the S-R group, but during the week after the switch, the S-R group gained less weight than did the R-S group (p<0.001). There were no other differences between the groups on a weekly basis.


Running distance
The distance run by OVX rats was not affected by whether they were given access to running wheels immediately or 3 weeks after ovariectomy (Figure 2). Rather, the distance run depended on week [F(2,12) = 9.53, p<0.01; pȠ2 = 0.614]. Pairwise comparisons revealed that, independent of group, OVX rats ran significantly less during their first week of access to running wheels compared to the next two weeks (ps<0.05, 0.001), which were not different from each other.
Figure 2 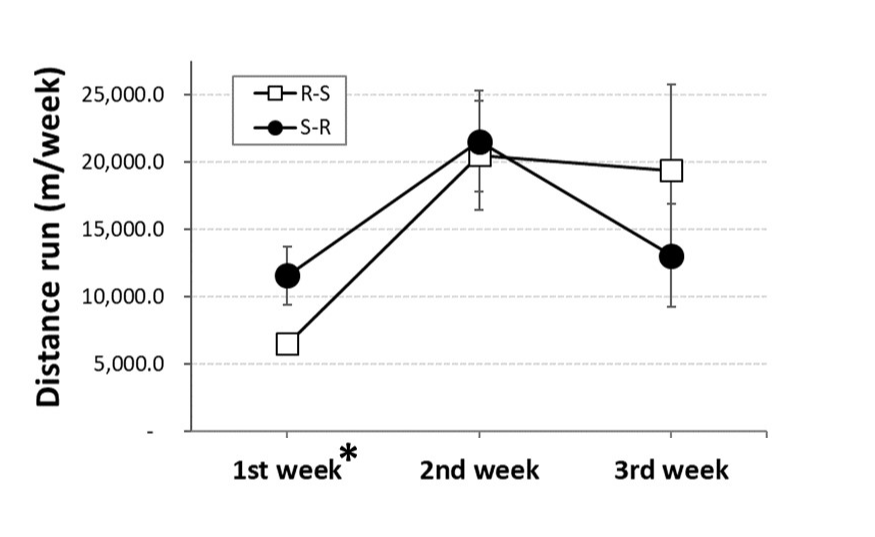 Peripheral effects
Running condition did not affect spleen weight (Table 1). However, t-tests revealed that plasma protein concentration was significantly less in the S-R group that initially were sedentary and then had access to running wheels for three weeks (Table 1; t(14) = 2.49, p<0.05; d = 0.522).
Table 1 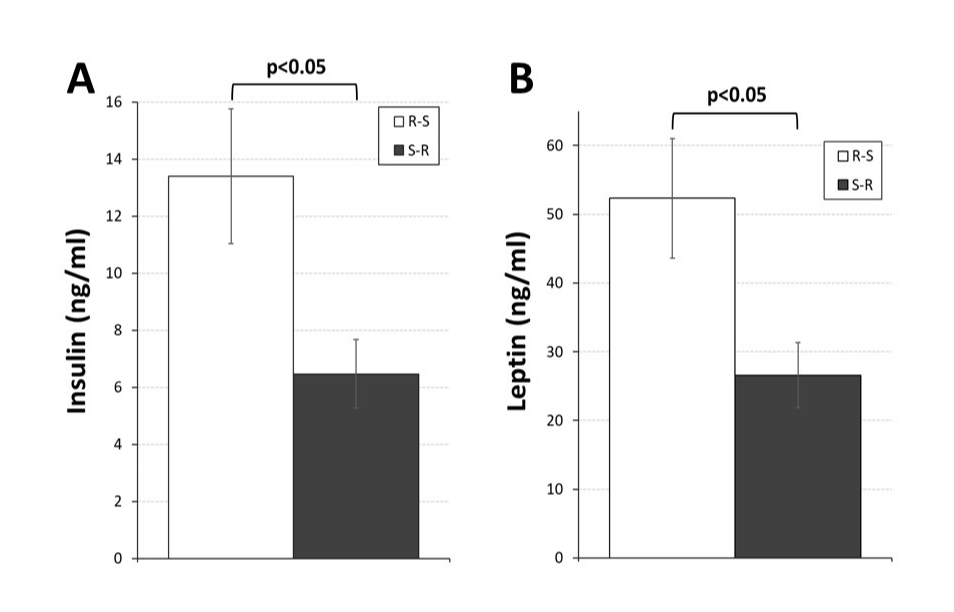 Neuroimmune factors
Individual comparisons of neuroimmune factors in the ARC, PVN, and DVC (Figure 4A-D) using Mann-Whitney nonparametric tests revealed that both GFAP and TLR4 levels in the DVC were significantly less in the S-R group that initially were sedentary and then had access to running wheels for three weeks (Z = 2.309, p<0.05; Z = 2.021, p<0.05, respectively). No differences in MCP-1 or IL-6 levels were observed in the DVC, nor did any neuroimmune factors differ in ARC or PVN. 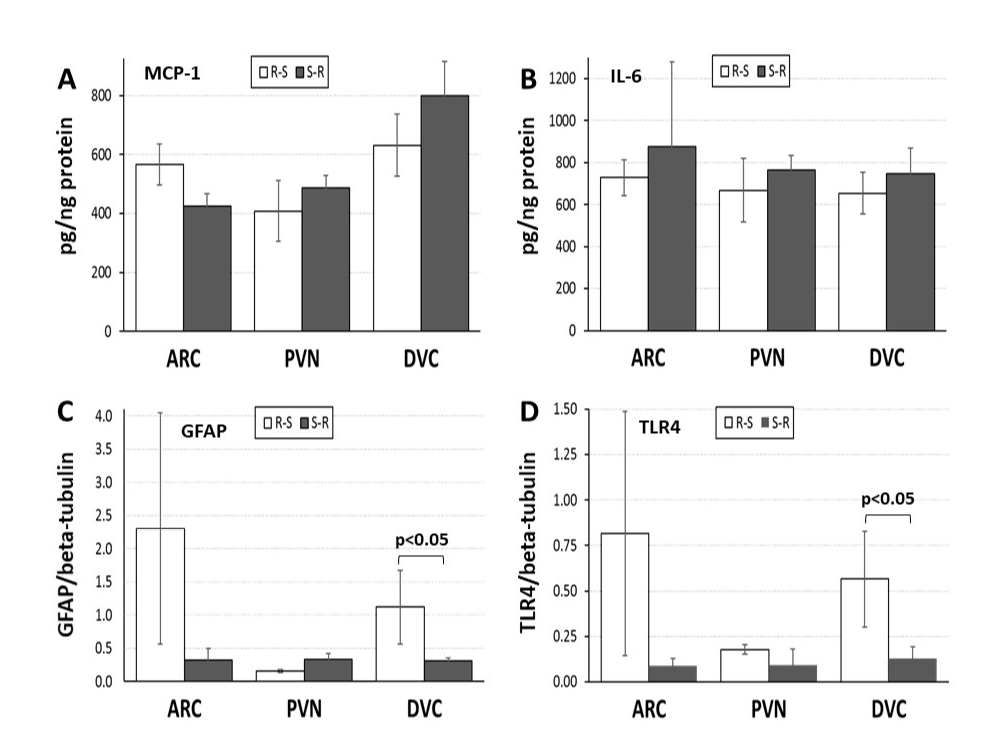 
Conclusion
Voluntary exercise had transient effects to slow the rate of weight gain in OVX rats, especially when exercise was initiated three weeks after ovariectomy. These transient effects on body weight were associated with decreased plasma leptin and insulin, and decreased levels of GFAP and TLR4 in the DVC. The latter may promote continued activation of receptors for insulin and/or leptin in the AP despite reduced circulating levels of insulin and leptin, and thereby sustain communication between CNS areas involved with the control of feeding and body weight regulation. As a result, body weight may be maintained even when running activity increases. In short, although the beneficial effects of exercise are increasingly emphasized as the obesity epidemic continues1, exercise may be accompanied by changes in metabolic hormones and neuroimmune factors that complicate its exclusive use as a weight-loss strategy. Thus, the possibility that reproductive hormones alter mechanisms associated with body weight regulation remains a challenge in understanding obesity and in identifying effective management strategies.