Regional Anesthesia for Hip Fractures in the Emergency Department 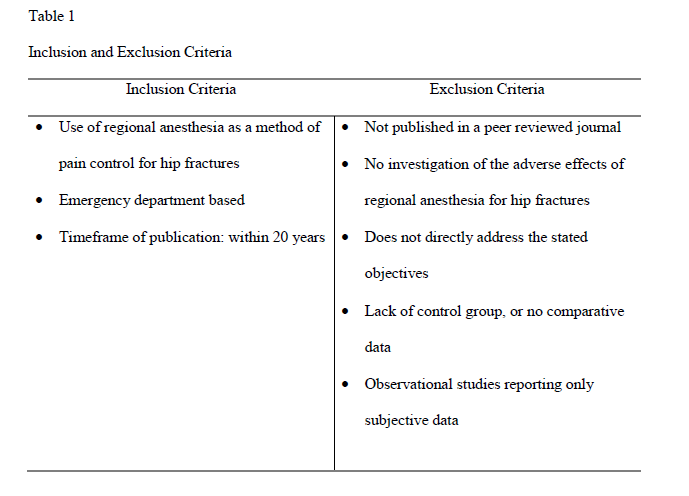 The inclusion criteria were chosen to identify articles that would directly address the proposed theory. The timeframe of the study was deemed important because of the vast advancements in ultrasound technology over the recent past. Adding data from studies using ultrasound served as an important means of making up-to-date clinical recommendations. The exclusion criteria eliminated studies which lacked a control group and comparative data. This criterion was chosen to avoid the risk of observer bias compromising the legitimacy of results. Since there was not a breadth of research on this topic, there were no further stringent exclusion criteria relating to study size, methodology, or statistical data collection. If an article fulfilled all the criteria listed above, it was included in the literature review.
Interpretation of Data. Each article was critiqued by the two main authors of this literature review. Articles were evaluated for their population size, demographics, study location, and timeframe. The investigation of these study characteristics provided evidence for their clinical applicability, generalizability, and external validity. The primary, secondary, and observed outcomes were also evaluated. Importance was placed on ensuring that authors initially stated their primary and secondary outcomes, as opposed to making conclusions at the end of their study. This was necessary to ensure that cofounding variables were not influencing data and data was not altered following results. Again, statistical methodology was not heavily scrutinized, as none of the reviewed studies represented large scale clinical trials. Instead, the basic study approach and resulting data was summarized. The summary of this information provided a basis for the overall strengths and weaknesses of the study and the potential impacts of those factors on data results.
RESULTS

DISCUSSION
From the literature, we have gained insight that regional anesthesia can offer a more rapid, efficacious, and safe alternative to pain control in patients with hip fractures when compared to traditional opioids, NSAIDs, and other modalities of pain control. Although the composition of data is based on many small studies, at moderate risk for bias, there seems to be a common theme of positive results reproduced by nearly every study. Generalizability and reproducibility speak volumes towards the legitimacy of data when it comes to medical research. Therefore, based on the current composition of data, it seems that there is moderate support for the use of regional nerve blocks in the ED, as this may improve many clinically relevant and patient oriented aspects of ED hip fracture care.