How to Differentiate Between Varying Types of Diabetes in Adult Patients

Abstract
Diabetes is a condition that clinicians are faced with treating in a wide variety of practice settings. The great majority of cases are diagnosed as either type 1 diabetes (T1DM) or type 2 diabetes (T2DM). Latent autoimmune diabetes in adults (LADA) is a form of diabetes comparable to T1DM in that it results from autoimmune destruction of pancreatic beta cells and requires treatment with insulin therapy. In contrast to T1DM, LADA presents much later in life and, thus may be diagnosed as T2DM. In some cases, none of these three types can be definitively diagnosed, implying there must be other types to identify. The case presented illustrates this; a patient diagnosed with T2DM was later suspected to be have LADA or an undetermined type of diabetes. Initially thought to be rare, LADA is being identified more frequently. By bringing awareness to the disease, more patients will be aptly diagnosed and receive the appropriate treatment sooner in the course of their disease.

Introduction
Diabetes is an epidemic with catastrophic consequences if left untreated or misdiagnosed. In the United States alone it is the seventh leading cause of death, and it is estimated more than thirty million people are living with this diagnosis.1 The most common diagnoses for diabetes include T1DM, T2DM, and gestational diabetes. However, there is an estimated 10% of all diabetes cases that may be more appropriately diagnosed as latent autoimmune diabetes in adults (LADA).2-4 LADA is a slowly progressing form of autoimmune diabetes, compared to T1DM, and is defined by adult age at onset, an initially-delayed need for insulin therapy, and the presence of diabetes-associated antibodies.2, 5-8 Its mixed presentation often leads to initial misdiagnosis as T2DM due to adult onset and a limited initial response to lifestyle improvements and some oral medications. Incorrect management of LADA may lead to poor glycemic control and a delay in the proper pharmacologic treatment may increase risk of complications.
T1DM is characterized by the autoimmune destruction of pancreatic beta cells. This destruction of beta cells is the result of the inappropriate generation of diabetes associated-autoantibodies such as islet-cell antibodies (ICAs), glutamic acid decarboxylase (GAD) antibodies, protein tyrosine phosphatase IA-2 (IA-2) antibodies, or insulin autoantibodies (IAA).2, 4 As a result, patients with T1DM retain little to no insulin production, and therefore, require insulin injections for survival. T1DM patients often encounter a trigger (such as certain viruses) and are typically diagnosed at an early age, present underweight due to weight loss from the body's inability to utilize glucose as an energy source and subsequent breakdown of fatty stores, and have the potential to transition into ketosis resulting in diabetic ketoacidosis (DKA).9 In contrast, T2DM results from genetic and environmental factors. Over time, these factors lead to development of insulin resistance and insufficient insulin production, among other mechanisms that lead to hyperglycemia.4, 5 While these patients are still able to produce insulin, when wildly uncontrolled, T2DM patients may go into a hyperosmolar hyperglycemic state (HHS) or DKA. While DKA is possible in these patients, it is not expected. However, T1DM patients are predisposed to DKA.9 Patients diagnosed with T2DM are usually adults at onset and are often overweight to obese (Body Mass Index (BMI) >25 to >30 kg/m²). The treatment options range from lifestyle modifications to oral anti-diabetic agents to insulin therapy.
Lab values such as A1C, fasting plasma glucose, random plasma glucose, or oral glucose tolerance test readings above normal thresholds are used for initial diagnosis of diabetes, but these are not indicative of one particular type. Often, the specific diagnosis of either T1DM or T2DM seems fairly intuitive based on patient and clinical characteristics (Table 1). Patients with T1DM are often diagnosed during childhood, appear thin with a BMI underweight to normal (<18 to 24 kg/m2), and rapidly require insulin after diagnosis. Many individuals often experience DKA with extremely elevated blood glucose levels, rapidly lose control with illness/infection, and are sensitive to even small insulin adjustments. Conversely, patients with T2DM are often diagnosed during adulthood, appear overweight to obese with a BMI >25 to >30 kg/m2, and initially may respond well to lifestyle modifications and/or non-insulin glucose-lowering agents. They rarely experience DKA when gross glucose elevations occur, but may experience HHS, and often are resistant to insulin, requiring larger doses to gain glucose control once insulin is eventually needed. These patterns fit the pathophysiology of each type of diabetes. However, not all patients present with such a clear set of characteristics. What does it mean when a patient has a mixed picture of characteristics and lab findings? Such a patient could represent LADA or potentially a newly recognized type or subgroup of diabetes; an example of how this scenario was approached is presented in the following case. 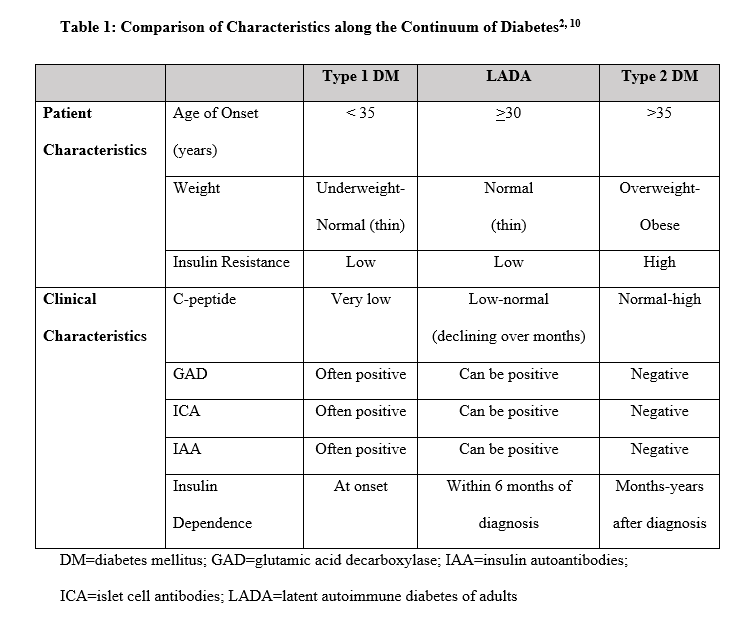 Patient Case
A 66 year-old African American male, regularly seen by internal medicine residents in an academic outpatient clinic, had been diagnosed with T2DM for 10 years. His past medical history was also significant for treated hepatitis C with cirrhosis, hyperlipidemia, hypertension, stroke, and adrenal nodule. During his care, he had been prescribed metformin 500 mg daily which was titrated up to 1000 mg twice daily, sitagliptin 100 mg daily, and various titrated doses of insulin detemir and insulin aspart. His A1C had varied widely over the previous 2 years from 5.8% (40 mmol/mol) to 11.0% (97 mmol/mol). After being hospitalized with DKA and with an increasing A1C, he was referred to the clinic's ambulatory care clinical pharmacist for evaluation and further education and management of his diabetes.
At his initial visit with the clinical pharmacist, he reported he had been adherent with his oral medications, metformin 1000 mg twice daily and sitagliptin 100 mg daily, but was incorrectly administering his insulin regimen, resulting in under-utilization of insulin and complete lack of insulin use over the previous two weeks. His A1C was 11.5% (102 mmol/mol) and providers were skeptical of the accuracy of his reported Self Monitoring Blood Glucose (SMBG) levels and believed his insulin use to be very inconsistent and infrequent. His BMI was 21.59 kg/m2 and he appeared thin. He was sensitive to small insulin dose adjustments, had a history of DKA, and rapidly lost control of his glucose with illness, much like someone with T1DM. The clinician provided education to the patient for appropriate timing and administration of insulin and SMBG checks relative to meals for a fixed-dose pattern-management approach to care, as well as discussion of LADA testing with potential for medication changes at the next visit.
Antibody testing was obtained and revealed IAA at 5.5 U/mL (normal <0.2 U/mL), C-peptide 3.3 ng/mL (normal 1.1-4.4 ng/mL), and GAD of <5 U/mL (normal <5 U/mL). At the patient's 1-week follow up appointment, based on clinical characteristics and the positive IAA, the clinicians discussed the potential diagnosis of LADA. However, a LADA diagnosis was still not definitive. When serum samples were tested for beta cell specific autoantibodies, only insulin autoantibodies were detected (IAA). The finding of IAA alone in a patient who has been treated with insulin for 10 years is not enough to define this patient as LADA since insulin antibodies may be found in subjects that have been using an insulin regimen prior to testing for IAA. The diagnosis would have been founded if GAD autoantibodies or ICAs had been detected. Additionally, this patient had normal C-peptide levels 10 years after diagnosis, which is more fitting with T2DM. Many of the patient and clinical characteristics fit into both T1DM and T2DM, leading to the suspicion of LADA. Due to the patient's inconsistent insulin adherence, it was decided to continue oral medications at that time and adjust his insulin regimen along with education of appropriate administration and reinforced SMBG tracking. The patient agreed to check his SMBG before meals and at bedtime. The possibility of being insulin dependent in the future was relayed, along with the likelihood of stopping his oral medications for diabetes.
After this education session, the patient began to administer insulin at appropriate times with meals and displayed adherence with both his insulin regimen and oral medications. Over the next few visits, SMBG levels greatly improved. At his last visit, his SMBG logs revealed the following average blood glucose ranges: breakfast pre-prandial 100-119 mg/dL (5.5-6.6 mmol/L), lunch pre-prandial 125-155 mg/dL (6.9-8.6 mmol/L), and dinner pre-prandial 140-165 mg/dL (7.8-9.2 mmol/L) (the patient never checked bedtime SMBG). The patient was ultimately using insulin detemir 11 units twice daily, insulin aspart 5 units with meals, metformin 1000 mg twice daily, and sitagliptin 100 mg daily. His A1C began to downtrend, with the most recent at 8.1% (65 mmol/mol), down from the 11.5% (102 mmol/mol) three months prior when he experienced DKA. Clinicians believed that with more time and fine-tuning of his insulin regimen, his A1C would have continued to improve to goal of <7% (53 mmol/mol). However, when the patient did not arrive for his next appointment, it was determined that he had been admitted to the hospital for complications due to hepatocellular carcinoma and, unfortunately, expired.

Conclusion
Clinicians are recognizing LADA more regularly than in the past, however, many patients are still incorrectly diagnosed with T2DM based on adult age at diagnosis. The case presented in this report highlights the overlap of various characteristics among patients with different types of diabetes and the difficulties that can cloud diagnosis. LADA may be even more prevalent than T1DM once all cases have been accounted for. The abundance of diagnoses of T2DM may someday be divided into better-understood and more-appropriate types or subgroups of diabetes. Appreciation of characteristics that are more associated with LADA should lead to many more, proper diagnoses, and therefore, appropriate management of diabetes. Otherwise, a delay in optimal treatment could produce more-rapid development of diabetic complications. More research is needed for continued identification of pathophysiologic mechanisms of LADA on the continuum of diabetes and identification of new types of diabetes. Efforts to better educate clinicians on these infrequently encountered disease types are important to improve recognition and proper treatment.