Abstract
An exceedingly rare clinical malady, Bouveret syndrome manifests with signs and symptoms of gastric outlet obstruction. Usually a complication of cholelithiasis, its rare manifestation has made it difficult to create standardized protocols for its management. Here we present a case report which did involve multiple imaging modalities, and treatment approaches that were unsuccessful in the removal of the obstructing gallstone. Only after converting to open surgical extraction of the obstructing gallstone were we able to afford the patient any symptomatic relief. To provide the patient with relief that was only provided by an eventual open approach to stone extraction. Originally described in 1896 by Leon Bouveret, a French internist, this syndrome continues to carry a significant degree of morbidity1. While an ideal approach to surgical treatment involves both endoscopic and laparoscopic intervention, the surgical treatment team must be prepared to convert to open for resolution to this rare clinical presentation.

Introduction
Accounting for approximately 1-3% of cases of gallstone ileus, and seen in approximately 0.3-0.5% of cases of patients with cholelithiasis2, Bouveret syndrome (BS) is a exceedingly rare pathology that can result in gastric outlet obstruction. While gallstones have been known to create fistulous tracts to the common bile duct, and the colon, BS is unique in that the fistulous migration of a gallstone from the extrahepatic biliary tract results in stone erosion into the lumen of the small intestine is primarily the cause of outlet obstruction in this patient population. Treatment typically consists of either endoscopic approaches at stone retrieval, open surgical approaches, or a combination of both.
Here we present a challenging case where the obstructing gallstone was only peripherally calcified, and the majority of the stone was isoattenuating to the biliary and gastric content. The patient also presented with vague clinical symptoms and was able to tolerate fluid without definitive evidence of gastric outlet obstruction. CT imaging also did not show flagrant signs of gastric outlet obstruction.
Case Presentation
History
An 84-year-old female with a past medical history of coronary artery disease, congestive heart failure, hypothyroidism, and hypertension presented to our hospital with a chief complaint of abdominal pain for approximately one day located in the epigastrium without radiation. She additionally reported associated nausea without vomiting for approximately two weeks but reports no prior history of similar abdominal. She tried over the counter medications that had failed to provide any relief.
Exam
Standard laboratory work-up on arrival failed to demonstrate significant lab abnormality (white blood cell count 8.5, blood urea nitrogen 16, creatinine 0.92, total bilirubin 0.5, aspartate aminotransferase 14, alanine aminotransferase <9, alkaline phosphatase 84, Lipase 26. On a physical exam the patient was found to be hemodynamically stable in no acute distress with vital signs as follow: (temperature: 37.1 C, pulse: 100 beats per minute, respirations: 16 breaths per minute, blood pressure: 120/75 mm Hg, pulse oximetry: 97%). Moderate tenderness to palpation in the right upper quadrant and epigastrium of the abdomen was appreciated on exam, however, no signs of voluntary guarding or peritonitis were appreciated.
CT of the abdomen and pelvis revealed pneumobilia within the intrahepatic and extrahepatic biliary system. A peripherally calcified stone measuring approximately 3.6 cm is noted in the first part of the duodenum with extensive fat stranding and a fistula between gallbladder and the first segment of the duodenum. No flagrant CT evidence of gastric outlet obstruction is noted at initial presentation. 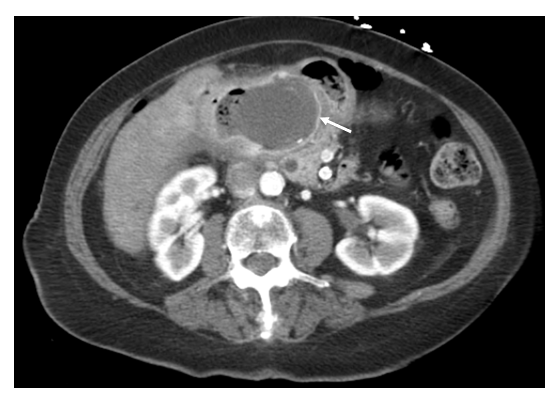 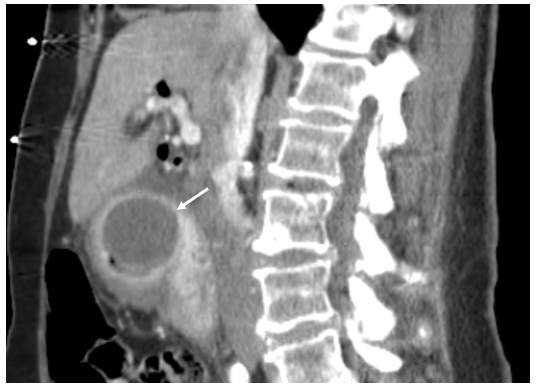 Figure 1. Axial and sagittal images of the CT of the abdomen with contrast showing a peripherally calcified gallstone (white solid arrow) in the first portion of the duodenum, cholecystoduodenal fistula, and pneumobilia.
The patient was admitted to the medical service and general surgery was consulted for esophagogastroduodenoscopy on the following day.
Management
With the first attempt at endoscopic retrieval, no abnormalities were observed save for the previously described 5cm gallstone in the bulb of the duodenum which was found to be only partially obscuring of the duodenal lumen which would explain the patient’s ability to continue to tolerate intake of liquids. During this initial endoscopy, multiple attempts were made to grasp and manipulate the stone. Retrieval with an endoscopic basket was also attempted however our basket was not large enough to encompass the stone. We then did attempt to use a therapeutic score however, it would not fit through the laryngeal mask airway used by our anesthesia team for airway control, therefore the patient was intubated in order to introduce the therapeutic scope. Once again, multiple attempts were made at morselizing the stone using both a biopsy forcep and a rat-tooth grasper. Although multiple small pieces of stone were able to be broken off, and the stone was freed enough to be able to spin, we were unable to withdraw the stone into the stomach. At that time the procedure was discussed with the family who opted for watchful waiting and conservative measures as opposed to laparotomy. The decision to undergo repeat endoscopy in 48 hours was reached and our initial approach was aborted. 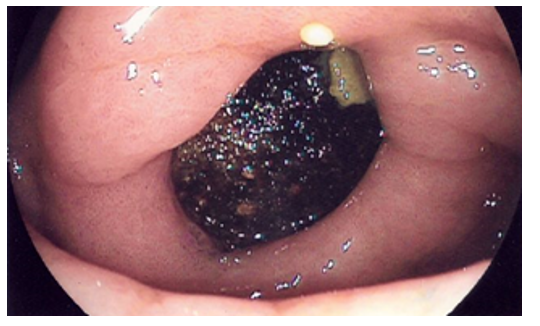 Figure 2. Initial visualization of impacted gallstone, distal to the pylorus.
On hospital day four, the decision to repeat endoscopy was undertaken with the adjunctive use of laser lithotripsy to aid with stone fragmentation. Holmium Laser was used at 10hz with energy setting at 5 joules. Total energy used was 1,413 J using two different sizes in fibers: 365 micron and a 550 micron. Again, attempts were made to grasp and flush the stone with minimal effect. The endoscopic laser was then hooked up and multiple attempts to fragment the stone were made. This proved challenging given the location of the stone and the working channel of our therapeutic gastroscope.
More specifically stones located at the duodenal bulb and required a sharp deflection of the therapeutic scope towards right placing our working port to the left. More specifically, stones located at the duodenal bulb required a sharp deflection of the therapeutic scope towards right in order to obtain adequate visualization which placed the scope’s working port to the left of our intended target rendering it minimally effective. Several attempts were made at optimizing our visualization however this continued to prove difficult. Further attempts through using an ERCP scope were also undertaken and also proved unsuccessful. Again, morselization with a rat-tooth forcep was undertaken and despite dislodging several small fragments the stone was once again unable to be retrieved, prompting us to terminate our endoscopic approach. An open surgical approach was once again discussed with the patient's family and they were then in agreement to proceed with laparotomy for definitive retrieval of the gallstone. 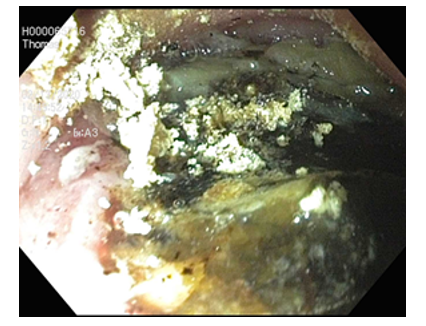 Figure 3. Close up image of gallstone after partial fragmentation with use of Holmium laser.
On hospital day 5, the patient did undergo laparotomy. Our approach consisted of a right subcostal incision which allowed us to enter directly over the duodenal bulb and the first portion of the duodenum. Inspection of the abdomen did reveal significant inflammation in the right upper quadrant and the gallbladder was not readily identifiable as the colon was tethered in this region. The stomach was readily identifiable and the gallstone was easily palpable. At this point we did decide to perform a gastrostomy on the anterior surface of the stomach. The gallstone was easily visible and multiple attempts at grasping the stone were made using various instruments however due to its size and shape, this proved difficult. An attempt to pass a foley catheter distal to the stone in order to use it like a Fogarty balloon was made but ultimately proved ineffective as well. A large angled allis clamp was then used which allowed its retrograde movement and ultimately allowed us to use a double toothed tenaculum forcep to grasp the stone and extract it. An additional finger sweep of the cholecystoduodenal fistula was performed after extraction which did reveal two additional small gallstones. Taking into account the patient’s age and comorbidities, the decision was made not to take down the fistula and/or perform a cholecystectomy, leaving the cholecystoduodenal fistula intact. The gastrostomy was repaired primarily in two layers and an omental patch was placed over the repair site. After repair of the gastrotomy and omental patch, nasogastric tube placement was confirmed intraoperatively and the subcostal incision was primarily closed with sutures and staples.

Figure 4. Gross specimen showing the extracted stone.
In the post-operative period, the patient had an uneventful course. The patient had the return of bowel function on postoperative day 3, however, the nasogastric tube was maintained for a total of five days postoperatively. On postoperative day 5, a fluoroscopic upper GI study was performed to evaluate for any potential leak at the gastrotomy repair site. No leak was found and oral intake was resumed. Immediately postoperatively and at discharge the patient was prescribed Actigall 300mg BID to be taken indefinitely in efforts to prevent gallstone formation as the cholecystoduodenal fistula was left intact as previously mentioned.
Discussion
Diagnosis and Management
The term Bouveret's syndrome was first coined in 1896 by a French physician, Dr. Leon Bouveret. Many people develop cholelithiasis by the age of 75, but only few people develop complications. The most common but ominous complication that we often encounter is when the gallstone is stuck at the ileocecal valve and causes obstruction known as "Gallstone ileus". Chronic inflammation is believed to be the cause of cholecystoenteric fistula that allows the passage of the stone to the small bowel. Bouveret's syndrome is caused by a large gallstone (greater than 2.5cm) that causes the gastric outlet obstruction. Establishing a diagnosis can be further aided when Rigler’s triad is present which consists of a dilated stomach, pneumobilia, and presence of a radio-opaque shadow suggestive of an anenteric gallstone8.
The predilection of the syndrome is seen in elderly females over 65 years of age 3,4and these patients typically have several other medical comorbidities. Furthermore, it is important to note that only in approximately 2/3 of cases are obstructing stones able to be visualized and even fewer cases result in stone retrieval with endoscopic approaches8.
Unfortunately, most patients present with vague clinical symptoms including nausea and vomiting and abdominal pain. Subsets of patients present with weight loss or hematemesis5. The working diagnosis of acute gastric outlet obstruction in elderly patients is vast. With the development of imaging and increased availability, CT of the abdomen helps to diagnose early and provide the details of where the obstruction is located for surgical planning. Some literature also indicates that x-ray and ultrasound can be utilized to diagnose but they play less role for surgical planning. However, it is important to note that CT also has its limit as isoattenuating or radiolucent stones can be missed on imaging6. The most common imaging findings include; pneumobilia, ectopic gallstone, and partial or complete intestinal obstruction.
Treatments
Although the treatment for traditional gallstone ileus is primarily surgical, the first line of treatment for Bouveret’s syndrome is endoscopy. However, the current success rate with endoscopic retreival is only at about 9%. There are other options including endoscopic laser lithotripsy or shockwave lithotripsy as alternative to surgery.
Clinical bottom line
Bouveret's syndrome is a rare but ominous finding that should be considered as a working diagnosis in elderly patients who present with gastric outlet obstruction considering the fact that it's high morbidity rate (as high as 15-33%). It is important to get the early cross-sectional CT image of the abdomen to diagnose early and to act promptly for attempts at endoscopic stone retrieval however a surgical treatment may need to be employed in order to decrease mortality.