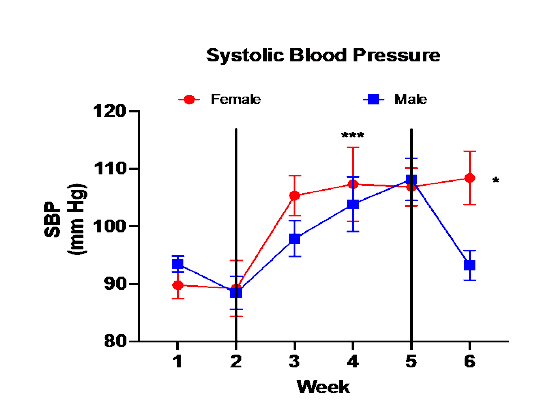 Figure 1. SBP (mean ± sem) of male and female mice during baseline week (1) and the four weeks with mice on HSHF diet (2, 3, 4, 5), and the recovery period where mice consumed normal diet with water (6). SBP was measured daily of each mouse assigned to the metabolic cages and values were averaged for the specific week. SBP did not increase after the first week on the HSHF diet (2). (*** - SBP in weeks 3, 4, & 5 > SBP in baseline week (1) and week 2, p<0.001 via 2-way repeated-measures ANOVA). SBP in male mice decreased in the recovery period in male mice but not in female mice. (* - female SBP > male SBP in recovery period p<0.01).
Figure 2 shows sodium excretion and sodium balance data. Measurements were taken daily while mice were in metabolic cages. Female mice tended to have lower Nae and higher sodium balance compared to male mice. 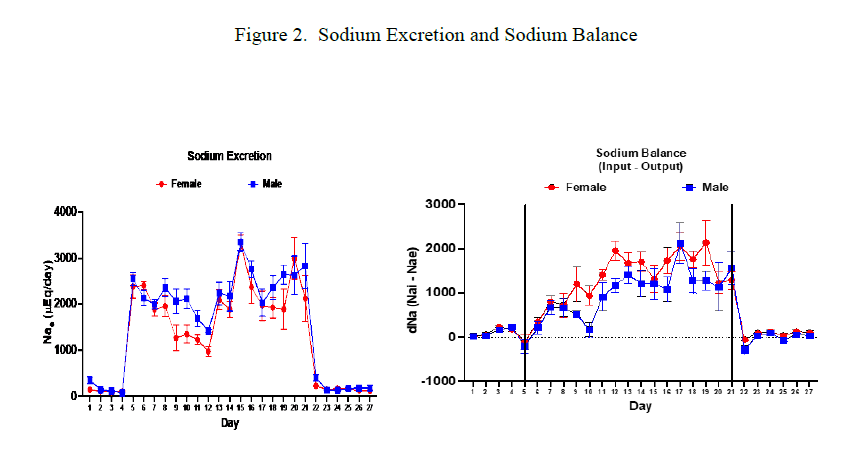 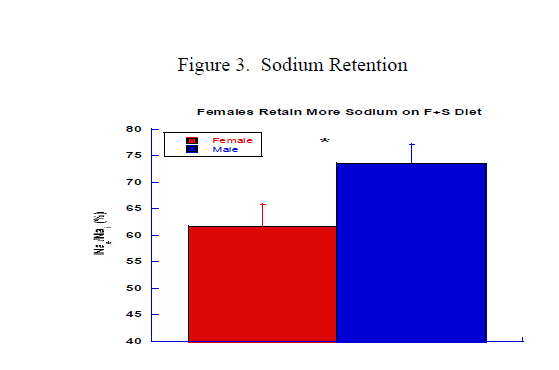 Figure 3. Graph shows average ratio of the ratio of sodium excretion-to-sodium intake during the HSHF consumption period. Females had significantly lower ratio than males (62.0 ± 4.4 vs 74.8 ± 3.7, * p<0.05). Data indicate that females retained more sodium throughout the HSHF period.
Moreover, during the recovery period females also had lower ratio compared to males (58.4 ± 4.3 vs 83.2 ± 6.0, p<0.01) which could explain the SBP results in the recovery period.

Table 1. Data showing relative expression with values of fold difference (FD) between female and male, i.e, male used as reference. All FD values in the table indicate higher expression in female kidneys. Results from baseline, week two, and week four come from the separate mice placed in bins (see Procedures in Methods), n=4/group. Results from the Recovery week come mice used in metabolic cages, n=6/group. One FD value in the study not shown in this table resulted in a significantly higher expression in male kidney – NaPi, sodium-phosphate cotransporter in proximal tubule, p<0.01). * p<0.5, ** p<0.01, *** p<0.001
Discussion
The obesity epidemic and high prevalence of hypertension have become global health concerns challenging the medical profession and placing enormous financial costs for treatment of the associated pathologies. The high risks associated with obesity and hypertension are modifiable with proper diet and exercise. While we strive to convince the public to engage in healthy habits, we should expect to continue treating patients with obesity and hypertension for years to come.
HSHF consumption in society contributes to both obesity and hypertension and research into the pathophysiology of HSHF in animals and humans has been quite extensive for the past several years. We set out to add to this body of knowledge by studying sex differences in mice consuming a HSHF diet. Our major goal was to determine if HSHF diet increased blood pressure in both male and female mice. Research has demonstrated that females are protected against high salt-induced increase in blood pressure compared to males19,20. So, a major question posed in this study was: would females be protected from elevated blood pressure during the consumption a HSHF diet? Another important issue we wanted to investigate was the renal handling of sodium. Since the kidneys control blood pressure via adjusting the renal excretion of sodium, it becomes important to measure Nae and sodium balance in both sexes. Finally, we investigated the molecular expression of major sodium transporters to provide insight to the results on blood pressure and sodium balance.
Results showed that the HSHF diet raised SBP in both male and female mice although it took until the second week on the diet to raise SBP (Figure 1). Our findings demonstrated female mice had no protection against increased SBP. In fact, SBP appeared to increase faster in females with higher SBP compared to males in week two of HSHF consumption. Of particular importance is the observation that SBP decreased in male mice but not in female mice during the recovery period. Thus, the addition of fructose to the diet could be responsible for the loss of protection and this might be explained by the renal handling of sodium.
The results on sodium balance in this study basically showed that both males and females retained a substantial amount of sodium during the HSHF diet (Figure 2). Based on our study female mice do not excrete more sodium than males when consuming high salt. This suggests that this mechanism is not the reason for protection from high blood pressure under high salt conditions in females. Estrogen is believed to play a major role in protection against hypertension, but it should also be remembered that research from many years ago demonstrated the salt-retaining effects of estrogen 21-23. Since then, studies have examined the roles of sex steroids on kidney function clearly demonstrating that both estrogens and androgens have important consequences on many renal functions 7-9,11,24,25.
Most relevant to this study, is a report by Soleimani and Alborzi who proposed that high fructose intake changes renal transport activity increasing sodium and chloride reabsorption in the proximal tubule 26. These authors presented a model involving fructose-induced increase in activity of the membrane transporters Glut5 which transports fructose, the sodium-hydrogen exchanger NHE3, which transports sodium, and the putative anion transporter 1 (PAT1) which transports chloride. This model could explain how high dietary fructose increases salt retention and induces hypertension. Further research is required to confirm this mechanism.
Our study showed that both male and female mice retained sodium during the HSHF consumption and females probably retained more than males as shown in figures 2 & 3. This might explain the loss of protection against the HSHF-induced increase in SBP in female mice. The expression data in Table 1 shows higher expression of renal transporters in the distal nephron of female kidneys. Female kidneys expressed higher relative expression of key sodium transporters including NKCC, NCC, NHE3, and ENaC than male kidneys. This now appears to be a consistent finding with other studies we have conducted and is consistent with other research into the sexual dimorphism of renal transporters 27 28. This could also explain the high SBP during the recovery period in female mice compared to male mice.
Future studies looking at the role of estrogen are being planned to determine if its presence increases sodium transport within the kidney. The study will repeat these experimental procedures in ovariectomized mice with and without estrogen supplementation. If estrogen is responsible for higher expression, the estrogen-supplemented mice should show higher expression of sodium transporters and different blood pressure profile than the placebo-treated mice.
Conclusion
HSHF consumption increased SBP in male and female mice. SBP decreased in male mice but not in female mice during the recovery period. We conclude that female mice are not protected from HSHF-induced increase in blood pressure. Both male and female mice retained sodium during the HSHF consumption period. Female mice had higher expression of some key renal sodium transporters, and this could be responsible for higher sodium retention and subsequent higher SBP in the recovery period. This study challenges the current position that females possess protective mechanisms against dietary-induced increases in blood pressure.