Abstract
Background: The association between elevated dietary salt consumption and hypertension is well known. Sex differences in blood pressure are also well known. The purpose of this study was to determine sex differences in blood pressure and in the renal handling of sodium in mice consuming a high salt diet.
Methods: Intact, 4 wk-old male and female mice (n=6/group) were placed in metabolic cages for 36 days. The mice consumed a normal diet for the first 3 days followed by a 4%-salt diet for 30 days and finished with 3 days back on the normal diet. Urinary Na+ excretion was determined daily. Sodium intake was determined from daily food intake. Systolic blood pressure (SBP) was measured daily via the tail-cuff method. Real-time quantitative PCR was used to measure expression of key mediators for sodium transport and regulation of blood pressure in the kidney.
Results: Female mice had lower SBP compared to male mice during high salt consumption (p < 0.001). Sodium balance during the high salt consumption period was significantly higher for females (p < 0.005). Molecular expression of the key sodium transporters was significantly higher in the kidneys of female mice.
Conclusion: Female mice had lower SBP compared to male mice while on a high salt diet yet they retained more sodium. Higher expression of distal-nephron sodium transporters could potentially explain the higher sodium retention in females. Overall, our results suggest that female mice are protected from salt-induced increase in blood pressure. We suspect that sex steroids have important roles in the renal handling of sodium and controlling blood pressure.
Keywords: Sex difference, blood pressure, salt, diet, kidney
Introduction
A report published in 2020 from the CDC (National Center Health Statistics) indicates the prevalence of hypertension in the United States was 45.4% among adults with men demonstrating higher rates than women (51.0% vs 39.7%, respectively) 1. It is well known that hypertension increases the risk for stroke, cardiovascular disease, and other pathologies 2-4. Hypertension has many causes, both known and unknown. High salt consumption is prevalent globally and is one of the well-known causes of hypertension 5. The American Heart Association recommends all adults limit sodium intake to 2300 mg/day with the ideal limit of 1500 mg/day 5. Most adults consume significantly higher levels of sodium as it is very difficult to achieve these relatively small levels with salt being a primary preservative in numerous food products 6.
The renal system is responsible for excreting excess salt from the body and preventing sodium-induced hypertension 7. The body adjusts to elevated dietary intake by a variety of hormonal and neural mechanisms resulting in increased excretion or decreased reabsorption of sodium in the nephron. Key sodium transport proteins in the nephron involved in the regulation of blood pressure (BP) include Na+-H+ exchange (NHE) in the proximal tubule, Na+-K+-2Cl- cotransporter (NKCC) in the thick ascending limb, Na+-Cl- cotransporter (NCC) in the distal convoluted tubule, and the epithelial Na+ channel (ENaC) in the collecting duct.
Sex differences in blood pressure regulation, cardiovascular, and kidney disease are well documented 8,9. Premenopausal women appear to have a degree of renoprotection which decreases and/or disappears after menopause 10. The loss of estrogen in menopause has been believed to play a key role in reducing renoprotection and causing hypertension in post-menopausal women although this remains to be confirmed 11. Interestingly, this idea has become controversial and has sparked an increased interest in other potential reasons for the role of sex differences in kidney and cardiovascular abnormalities. For example, testosterone has been shown to potentially harm renal function, and menopause not only changes the absolute level of estrogen but also alters the androgen-to-estrogen ratio 12-15.
Methods
The purpose of this study was to investigate sex differences in the renal handling of sodium and blood pressure in mice during a 30-day period of high salt consumption. Based on current literature demonstrating that females are protected from salt-induced hypertension we hypothesized that female mice would have lower blood pressure than male mice during high salt consumption 16,17. We measured intake and renal excretion of sodium, i.e., sodium balance, to investigate if the renal handling of sodium would correlate with blood pressure.
CD-1, 10-wk-old, pathogen-free male and female mice were purchased from Envigo Laboratories (Indianapolis, IN). Mice arrived at the OSU-CHS animal facilities and were placed in plastic cages where they consumed normal diet and water for two weeks. All mice appeared healthy with no observed abnormalities throughout the study. The OSU-CHS IACUC approved all experimental procedures with animals.
The study used two groups of mice, 6 males and 6 females. Mice were placed individually in metabolic cages. Daily measurements included body weight, food & water intake, urine flow rate, and urine Na+ concentration (UNa). An EasyLyte® electrolyte analyzer was used to measure UNa. For the first three days, mice consumed a normal diet (0.25% salt) with water. This was followed by 30 days of mice consuming a 4% salt diet (Teklad, TD 120254) with water. Upon completion of high salt consumption, the mice returned to normal diet for the final 4 days. Food was replaced daily and water replaced every 3-5 days.
The murine sodium balance was measured daily by subtracting sodium excretion from sodium intake. Sodium intake was determined via measuring daily food intake. Sodium excretion was determined by multiplying daily UNa by urine volume.
The relative expression of renal markers was measured via quantitative real-time PCR utilizing the ΔΔCt method for calculating relative expression18,19. At the end of the study period, the mice from the two groups were anaesthetized via isoflurane (Sigma, Science) and sacrificed via cervical dislocation. Total RNA was extracted from cortical renal tissue using the MELTTM Nucleotide Isolation Kit (Ambion, Austin, TX) and cDNA was synthesized using the RT2 First-Strand cDNA kit (QIAGEN). Custom PCR arrays produced by SA Biosciences (QIAGEN) contained previously-tested primers of the following markers: 1) ENaCᾳ (Scnn1a); 2) ENaCβ (Scnn1b); 3) ENaCγ (Scnn1g); 4) NKCC (Slcl2a1); 5) NCC (Slc12a3); 6) NHE3 (Slc9a3); 7) NHE2 (S19a2); 8) NaPi2A (Slc34a1); 9) SGLT (Slc5a12); 10) ᾳNaK ATPase (Atp1a1); 11) ATR1 (Agtra1a); and 12) ATR2 (Agtr2). An Opticon 2 (MJ Research) thermocycler and Sybr-green technology were used.
Figure 1. Key renal proteins involved in blood pressure regulation 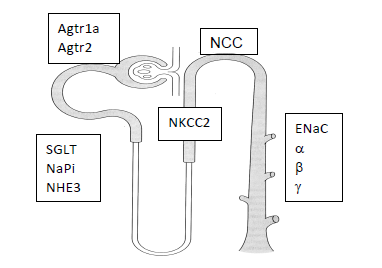 Systolic blood pressure (SBP) was measured in each mouse every other day via the tail-cuff technique using the CODA device from Kent Scientific (Torrington, CT) 20. The detailed description of this technique is described in an earlier paper 19. Briefly, the tail-cuff technique measures blood pressure via sphygmomanometry. This non-invasive technique provides accurate blood pressure measurement and is widely used 21-24.
Statistics: ANOVA with repeated measurements and Student T-test were used to determine differences between the group outcomes described above using Graphpad Prism 9.0 software, (version 9.3.1). Statistical significance was set at a p value < 0.05.
Results
Figure 2 shows the results of SBP (mm Hg) that was measured and recorded every other day throughout the study. Values shown between the two vertical lines in 1A represent the period on 4% salt diet and values outside the lines represent those measured in mice on normal diet. Males had higher SBP compared to females (100.1 ± 3.0 vs 92.5 ± 2.1, p<0.0001, 95% CI of difference: -10.3 to -5.3) 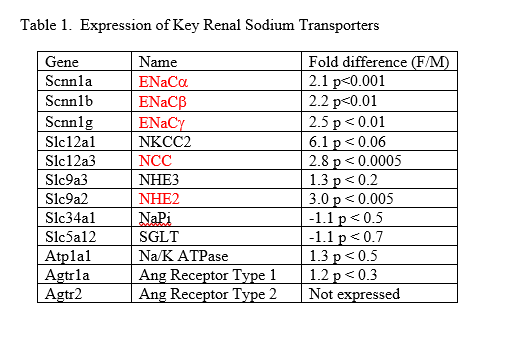 Discussion
The physiological regulation of blood pressure is complex and multifaceted 25. With the high prevalence of hypertension in society and the enormous cost of treating related diseases it is critically important to continue researching the causes and mechanisms of hypertension 3. Sex differences in blood pressure regulation are well-known with evidence demonstrating that premenopausal women have lower blood pressure and fewer cardiovascular and renal diseases compared to age-matched males11,17,26,27. Interestingly, salt-sensitive hypertension appears to increase in post-menopausal women with an increased risk of renal and cardiovascular pathologies 5,28. Understanding sex differences in salt-induced blood pressure and the molecular characteristics of the renal sodium transporters known to be involved in regulating blood pressure will provide a more comprehensive understanding for treating hypertension.
This study was conducted to determine the effects of high salt consumption on blood pressure and the renal sodium handling in male and female mice. The major focus was to determine if sex differences in blood pressure and sodium balance would be observed in male and female mice consuming a high salt diet. We also investigated molecular expression of key sodium transporters from male and female kidneys. The major finding of the study is that female mice had significantly lower SBP compared to male mice during the 30-day period of high salt consumption. If the renal handling of sodium explained the lower blood pressure in females, one would expect higher renal sodium excretion and lower sodium balance. However, our results showed just the opposite. Females had higher sodium balance than males and retained more sodium than males while consuming the high salt diet. Female mice excreted less of the ingested sodium and thus retained more sodium than the male mice.
Our molecular studies provide an explanation for the sodium balance data. Using real-time PCR, we found higher expression of several key sodium transporters in female kidneys. Specifically, higher expression was found in the distal nephron sodium transporters of NCC and the three isoforms of ENaC. Results were close to statistical significance for NKCC, and we suspect this transporter plays an important role in sex differences as well. These results are consistent with others who have shown a sexual dimorphism with respect to sodium transporters in the nephron 29 30. Assuming the higher expression leads to higher activity and thus increased sodium reabsorption, the results shown in Table 1 explain the sodium balance data.
Despite the higher sodium balance and the higher expression of sodium transporters, our results lead to the conclusion that the female sex is indeed protected against salt-induced hypertension. We are left to explain how female mice did not have an increase in blood pressure during the high salt consumption period. A possible answer comes from research findings regarding the effects of the sex steroids. Using gonadectomized female rats, Brinson et al. showed that female sex hormones protected the rats from high salt – induced hypertension 16. Other evidence into the protective role of female sex hormones particularly that of estrogen suggests that females (as shown in our study) may be able to retain more sodium without increased blood pressure 12,31,32.
An interesting phenomenon being investigated demonstrates mechanisms of how the body stores excess sodium in various tissues 33,34. It is reasonable to suspect that sex differences exist with how the body stores retained sodium. Thus, there are various possibilities as to how premenopausal females maintain normal blood pressure despite higher sodium balance and future research is required to determine these mechanisms. The current study demonstrates the complexity of regulating blood pressure in both sexes.
Conclusion
Female mice had lower SBP than male mice during a 30-day period of high salt consumption. Female mice retained more sodium while maintaining lower BP under high salt consumption compared to male mice. The higher sodium retention may have resulted from higher expression of sodium transport proteins in the nephron and thus higher renal sodium reabsorption. In summary, this study indicates that female mice are protected from high-salt induced increase in blood pressure during a 30-day period of high salt consumption and high sodium retention, potentially mitigated by upregulation of select sodium transporters. Future studies should investigate specific mechanisms of how females are protected under these high salt conditions compared to males. Findings from those studies will lead to novel medication therapies in the treatment of hypertension.