Fluorescence angiography (FA) utilizing indocyanine green (ICG) has been used for decades to assist with ophthalmic operations¹. Recently, its use has become more common in the management of tissue flaps, ostomies, and intestinal anastomoses. The use of ICG angiography in determining the viability of bowel and how it affects the surgical management of ischemic bowel is relatively unknown. Below is a case of a 63-year-old male in the intensive care unit (ICU) with an acute abdomen concerning for ischemic bowel. Fluorescence angiography was a key adjunct in the surgical decision making for this patient’s operative management.

A 63-year-old male presented with complaints of right upper quadrant abdominal pain with associated nausea, vomiting, fever, and chills. The patient had a past medical history of diabetes mellitus type II, hypertension, arthritis, and deep vein thrombosis. Surgical history included back surgery and an inguinal hernia repair. He had a 45 pack-year smoking history, drank one to two pints of vodka daily, and used marijuana and cocaine.

The patient developed severe anemia requiring transfusion of multiple units of packed red blood cells. He was diagnosed with a duodenal ulcer and underwent radiologic embolization of the gastroduodenal artery. The following day the patient developed tachycardia, nausea, and increased abdominal pain. Computerized tomography (CT) was performed which revealed dilated loops of small bowel and cecum compared to prior CT evaluation. There was noted perfusion to the superior mesenteric artery and no evidence of pneumatosis intestinalis. Lactic acid was obtained and found to be 3.6 mmol/L (0.6-2.4mmol/L), which was elevated from 1.3 mmol/L the previous day. On physical examination, the patient was found to have peritoneal signs consistent with an acute abdomen concerning for ischemic bowel.

The patient underwent exploratory laparotomy and was found to have global ischemia of his small and large intestine upon visual inspection. 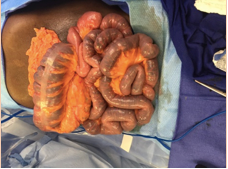 An internal hernia was found near the cecum which involved a large portion of the small and large intestine. After the hernia was reduced, the affected bowel was dark in color and did not show evidence of peristalsis, consistent with bowel ischemia. ICG angiography was used to assess bowel perfusion to minimize the area of resection and assess bowel viability. Three milliliters of intravenous ICG dye was administered to the patient, and the involved bowel was evaluated using SPY Elite™ fluorescence imaging system. The ICG was present throughout the vasa recta of the entire bowel, but there was inconsistent perfusion of the bowel wall.

Figure 2: Bowel with use of intraoperative ICG dye

With the vasculature of the bowel having been demonstrated per FA, the bowel was replaced within the abdominal cavity. A negative pressure wound therapy device (NPWT) was placed intra-abdominally.

He underwent serial abdominal exams and lactic acid level evaluations throughout the next 24 hours. The patient was taken to the operating room the following day. Grossly the patient was found to again have global ischemia on visual inspection but FA showed improved bowel wall perfusion. A NPWT device was again placed. The following day he returned to the operating room, and clinical assessment of the patient’s bowel perfusion was greatly improved. All of the patient’s small and large intestine appeared to be viable, and his abdomen was closed. The patient was later discharged from the hospital without any other surgical intervention required. He was seen in the general surgery clinic one week after being discharged with the patient having no further sequalae.

ICG dye is a sterile, water-soluble compound that absorbs infrared light with a peak absorption of 800 nanometers. Once injected it binds to plasma proteins and remains in the vasculature with marginal leakage into the tissues. The compound has a short half-life of 3-5 minutes, allowing it to be used multiple times in a single surgical procedure.1 ICG dye has been approved by the FDA for use for other indications since 1958 and provides an image that has the ability to provide a numeric assessment of tissue perfusion.2 The FDA has approved the SPY™ system for the use in cardiovascular, gastrointestinal and plastic/reconstructive surgical procedures.3

Fluorescence angiography for evaluation of intraoperative bowel perfusion is a relatively new operative technique.⁴ Prior to the development of this technology, clinical experience was used to assess the vascular status of the bowel, making it a subjective evaluation.¹ Other intraoperative modalities to evaluate vascular compromise are Doppler, Wood’s lamp, and dye.⁴ Despite the availability of these modalities along with clinical judgement, unnecessary extensive bowel resections occur.² The addition of ICG dye technology has supplemented clinical judgment by allowing visualization of the arterial inflow and venous return.¹ However, there has been minimal publication on intraoperative use of FA technology in ischemic bowel cases.

Matsui et al published results of use of ICG dye to determine viability of induced ischemic bowel in both swine and rats. This study chose swine as their bowel anatomy closely resembles that of human anatomy. The results of this study revealed that clinical judgement alone had a high sensitivity (93-100%) but a low specificity (47-70%). The addition of ICG dye increased the accuracy primarily by detection or absence of an arterial inflow peak.2 This study assists in the argument that use of ICG dye can be a useful tool, along with clinical judgement, in evaluating ischemic bowel intraoperatively.

The use of fluorescence angiography in the intraoperative management of ischemic bowel cases is a new technique that has few publications supporting its efficacy. Most reported cases using this technology involve assessment of vascular perfusion to bowel anastomosis and colostomies. In this case, its use along with clinical judgement prevented an unnecessary bowel resection and it associated morbidities. Fluorescence angiography is a useful adjunct in the intraoperative management of ischemic bowel.