Patient in this case report has a history significant for HIV/AIDS and presented with vague abdominal symptoms. He was diagnosed with diffuse large B cell lymphoma. Prevalence and risk factors of B cell lymphoma in the HIV population is reviewed. High clinical suspicion is required to diagnose non-Hodgkin’s lymphoma in patient’s presenting with vague symptoms and a missed diagnosis can often prove fatal.

Infection with human immunodeficiency virus (HIV) leads to a variety of infectious etiologies that are directly related to the control of the viral load and integrity of the immune system as determined by the CD4 T-cell count. In addition, there are acquired immunodeficiency syndrome-defining lesions that are not infectious in etiology—namely, malignancies. These include Kaposi’s sarcoma, high-grade non-Hodgkin lymphoma (NHL) of B cell/unknown immunologic phenotype, and invasive cervical carcinoma. Systemic NHL is most commonly diagnosed as diffuse large B-cell lymphoma and less commonly Burkitt lymphoma.1 The incidence of AIDS-related NHL has not changed significantly, but lymphoma has become more common as the initial AIDS-defining condition and has not significantly decreased in incidence with the advent of highly active antiretroviral therapy (HAART).2 These lymphomas are often more aggressive when compared to the general population, and as in the case of the presented patient, fatal.

Case Description: A 34-year-old male presented to the emergency department with a three day history of abdominal pain, dyspnea, and cough productive of clear sputum. His past medical history was significant for acquired immunodeficiency syndrome (AIDS) with a CD4 count of 318 cells/mm3 and an undetectable viral load. He denied use of tobacco products. He reported occasional alcohol as well as marijuana use. His family history was significant for coronary artery disease. His home medications were reported to be hydrochlorothiazide 25mg by mouth daily, efavirenz-emtricitabine-tenofovir disoproxil fumarate 1 tablet by mouth daily, potassium chloride 20 mEq by mouth daily, bupropion 300mg by mouth daily, zolpidem 5mg by mouth nightly as needed for insomnia.

Vital signs on admission were significant for a temperature of 99 degrees Fahrenheit, a pulse of 132 beats per minute, a respiratory rate of 18 breaths a minute, a blood pressure of 137/102 mmHg, and an oxygen saturation of 93% on room air. His initial physical examination revealed tenderness to palpation in the right upper quadrant of the abdomen but was otherwise unremarkable. Murphy’s sign was negative. Auscultation of the lungs revealed scattered rhonchi in the right lower lobe. A chest x-ray revealed bibasilar infiltrates and effusions. He was started on empiric antibiotic therapy with levofloxacin 750mg by mouth daily for pneumonia.

Subsequent to the thoracentesis, he developed respiratory distress and was endotracheally intubated. Bronchoscopy was performed and bronchoalveolar lavage samples were obtained. Acid-fast cultures were obtained and were negative. A CT of the chest (Figure 1) without contrast was significant for periaortic and precardiac lymphadenopathy, as well as ill-defined and heterogeneous liver parenchyma. He developed acute kidney injury with anuria necessitating sustained-low efficiency dialysis. Renal ultrasound showed multiple hypoechoic ovoid masses incidentally noted within the liver (Figure 2). 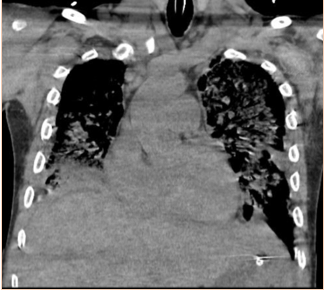 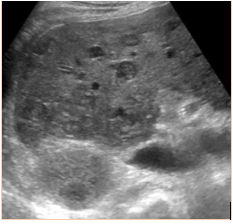 A CT of the abdomen and pelvis with and without contrast was significant for diffuse mesenteric stranding and edema, hyperemic omental thickening, and circumferentially enhancing pelvic peritoneum with hepatomegaly (Figures 3, 4). Multi-compartmental chest, abdominal, and pelvic adenopathy, as well as innumerable ill-defined hypoattenuating hepatic lesions were identified. 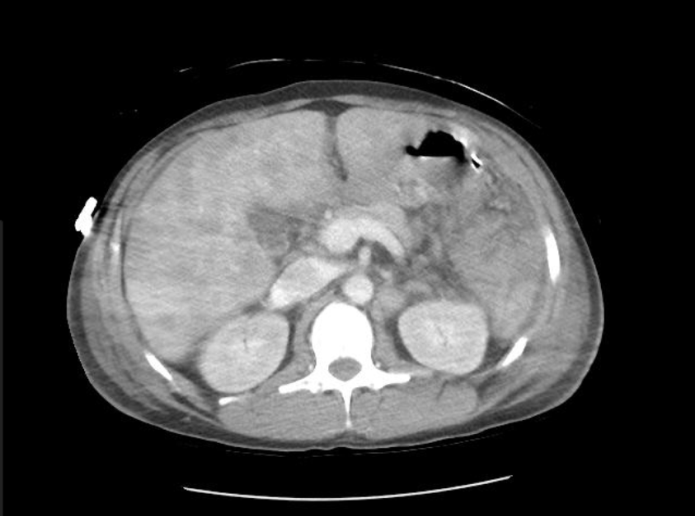 Figure 3: Cross sectional CT abdomen and pelvis with and without contrast 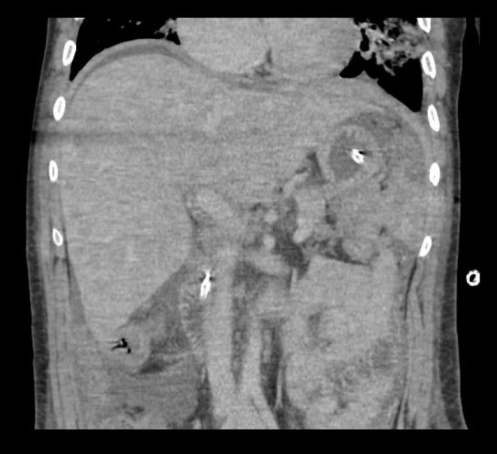 Figure 4: Coronal CT abdomen and pelvis with and without contrast

The incidence of AIDS-related malignancies has significantly declined since the advent of HAART.3 EBV is associated with approximately 35% of all Burkitt lymphoma diagnoses in the Western HIV population.4 One study found that younger age, adherence to anti-retroviral treatment, and later calendar year were all associated with reduced risk of systemic non-Hodgkin lymphoma.3,5 The patient presented was adherent to his antiretroviral medication, had reportedly only missed six total doses in the preceding six months, and had a CD4 count greater than 200 cells/mm3 for approximately one year prior to the onset of symptoms. Some research has proposed that patients who have a low nadir CD4 count at presentation confer a substantially increased risk of Burkitt lymphoma despite eventual high CD4 counts and excellent viral load control.3 The presented patient’s CD4 count upon diagnosis of HIV was 129 cells/mm3 and his viral load was 242,980 copies/mL.

A high HIV viral load is also a risk factor for NHL. The risk of NHL rises significantly for those with plasma HIV RNA levels >100,000 copies/mL compared with those with controlled viral loads. Two large cohort studies have demonstrated an increased risk for NHL in individuals with extended periods of uncontrolled HIV viremia while receiving HAART and this was most pronounced for Burkitt lymphoma.6 The patient presented had an undetectable viral load for approximately one year prior to diagnosis of NHL.

Current HIV/AIDS guidelines recommend the same routine screening for malignancies as the general population.12 As HIV has become better understood and treatment regimens have become more robust, the incidence of AIDS-defining lymphomas has decreased.4 Additionally, with new guidelines recommending initiation of HAART therapy regardless of CD4 count, it should be expected that the incidence of lymphoma in the HIV population will continue to decline. However, a high index of suspicion for malignancy should remain in a patient infected with HIV presenting with vague complaints and no identifiable source of infection. Early imaging and biopsy are crucial to obtaining a diagnosis. Ultimately, a higher index of suspicion for malignancy in this patient could have led to an earlier diagnosis and perhaps a better outcome.