Neurogenic stunned myocardium (NSM) is a reversible triad of left ventricular dysfunction, electrocardiogram changes, and elevation of cardiac enzymes in the setting of neurologic insult. Clinically, a subarachnoid hemorrhage (SAH) adds a layer of complexity in accurately diagnosing the etiology of cardiomyopathy. The proposed pathophysiological mechanisms for NSM have previously included hypothalamic and myocardial perivascular lesions. More recently, alternative research has focused on myocardial microvascular dysfunction and genetic polymorphisms. Management has remained largely guided by case reports that cite the benefits of inotropes and intra-aortic balloon pumps in the instance of cardiogenic shock complicating NSM. When NSM follows SAH there are numerous complications, which include pulmonary edema, arrhythmias, and prolonged intubation, all of which can impact outcomes and increase morbidity and mortality. This highlights the need for accurate and timely diagnosis of NSM, which has remained a clinical challenge.

We report a case of a 52-year-old female who presented to the ICU with complaints of atypical chest pain without neurologic complaints or lateralizing signs. She was admitted to the ICU for persistent chest pain with concurrent ECG T-wave inversions. Within 24 hours she developed lateralizing neurologic signs and altered mental status with subsequent imaging which showed evidence of SAH. We describe characteristics and outcome in this patient with aneurysm-associated SAH.

Neurogenic stunned myocardium (NSM) is a significant complication of subarachnoid hemorrhage (SAH) which is clinically challenging to diagnose. Traditionally, NSM is characterized by transient dyskinesia of the left ventricular apex in a myocardial distribution covered by more than 1 coronary artery.1,2 There is a 1.2% to 5.6% prevalence of this complication after SAH.3-5 A variant, or inverse form, in which the mid or basal left ventricular segments are dysfunctional and apical left ventricular segment contraction is preserved, was first described in 2005 and has since been increasingly reported.6-8

A 52-year-old female with a history of hypothyroidism, tobacco use, and anxiety presented to the emergency department with a three day history of epigastric abdominal pain with associated anterior neck pain and nonbilious emesis. Initial evaluation included a chest roentgenogram which was indicative of right-sided multi-focal pneumonia. CT of the abdomen/pelvis did not show evidence of intra-abdominal pathology, but findings were consistent with right sided pneumonia. Laboratory evaluation was performed which revealed initial troponin 0.68 ng/mL. Subsequent serial ECGs revealed persistent sinus tachycardia, prolonged corrected QT interval of 529-540 milliseconds, and T-wave inversions noted in the lateral and anterior leads. (Figures 1 and 2)

She was given aspirin, atorvastatin and bolused intravenous heparin in addition to empiric antibiotic therapy with cefepime and azithromycin and admitted to the ICU.

Shortly after arrival in the ICU, an echocardiogram was obtained which was significant for borderline systolic left ventricular function (ejection fraction forty-one percent) with regional wall motion abnormality. The mid-distal anteroseptal, anterior and anterolateral walls were hypokinetic (Figures 3 and 4). 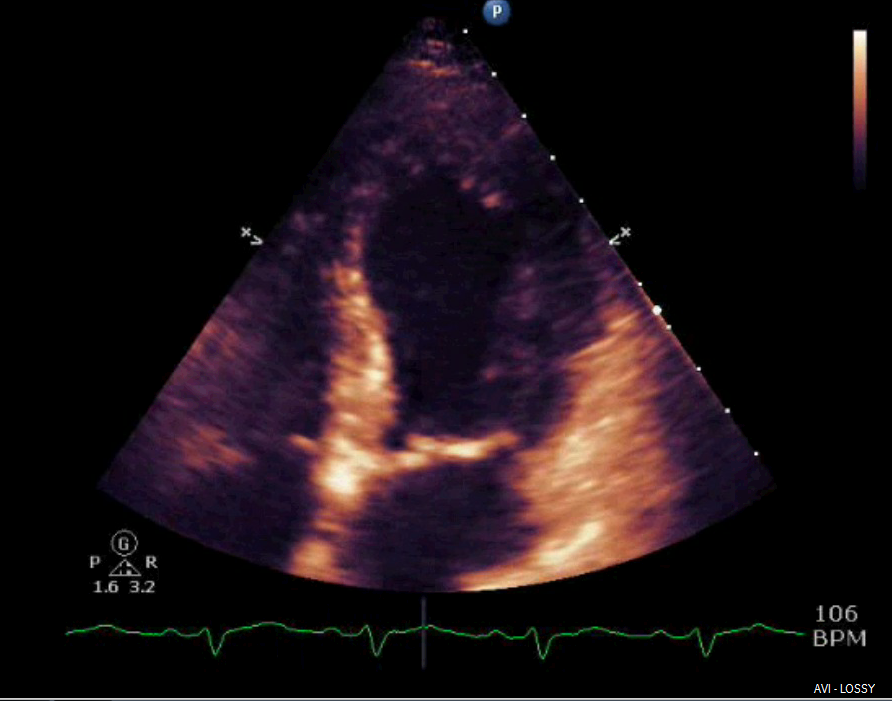 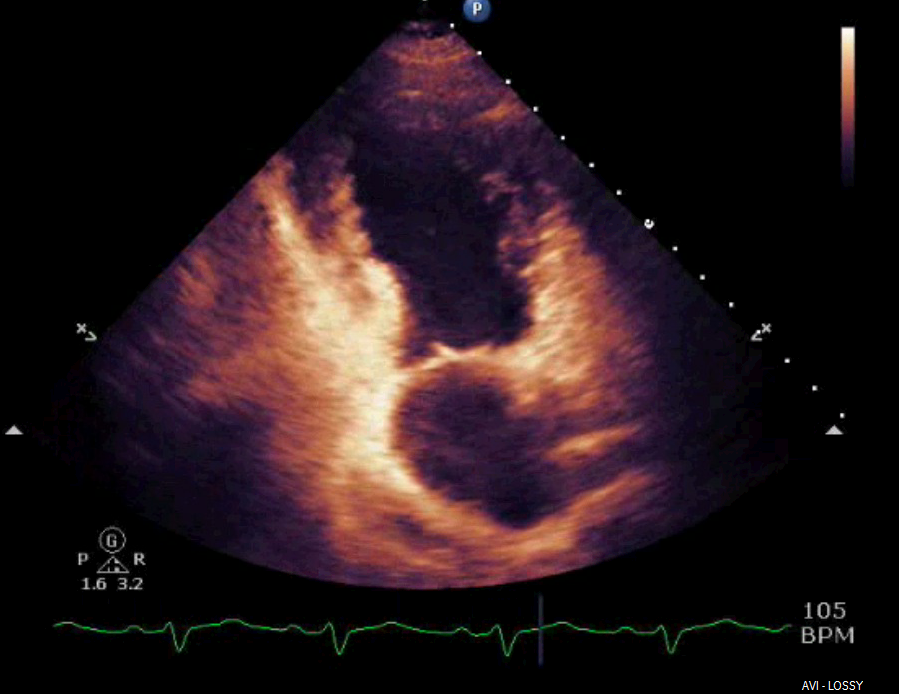 Serial troponin levels revealed a downward trend of 0.68, 0.53, and 0.33 ng/mL. That evening, the patient requested a sleep aid and was provided temazepam. She subsequently developed altered mental status. She was oriented to name and date of birth only and had difficulty following commands. She did not display lateralizing signs. Serial neurologic evaluations revealed development of anisocoria with exotropia. A CT of the brain without contrast was significant for diffuse cerebral edema with SAH complicated by obstruction at the level of the cerebral aqueduct. Proximal hydrocephalus without evidence of herniation was noted (Figure 5). 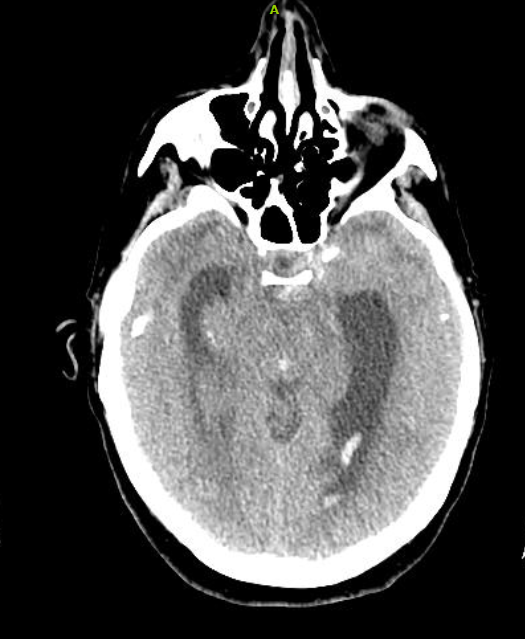 She was intubated and given intravenous mannitol, the head of bed was elevated, and heparin was reversed with protamine sulfate prior to transfer to a facility with neurosurgical capabilities.

An external ventricular drain was placed with blood-tinged return. A CT angiogram of the head and neck revealed a moderately large aneurysm projecting posteriorly and inferiorly from the supraclinoid segment of the left internal carotid artery. Subsequently, she underwent successful coil embolization of the aneurysm.

A repeat echocardiogram showed an ejection fraction of forty percent but with severe anterior wall hypokinesis. The prior ECG findings, elevated troponin, and wall motion abnormalities warranted an evaluation for coronary ischemia. During a nuclear stress test she reported dyspnea, dizziness, and fatigue but denied chest pain. Lexiscan results revealed an ejection fraction of seventy-five percent without wall motion abnormalities and without reversible ischemia, which was interpreted as a normal nuclear imaging study (Figure 6). 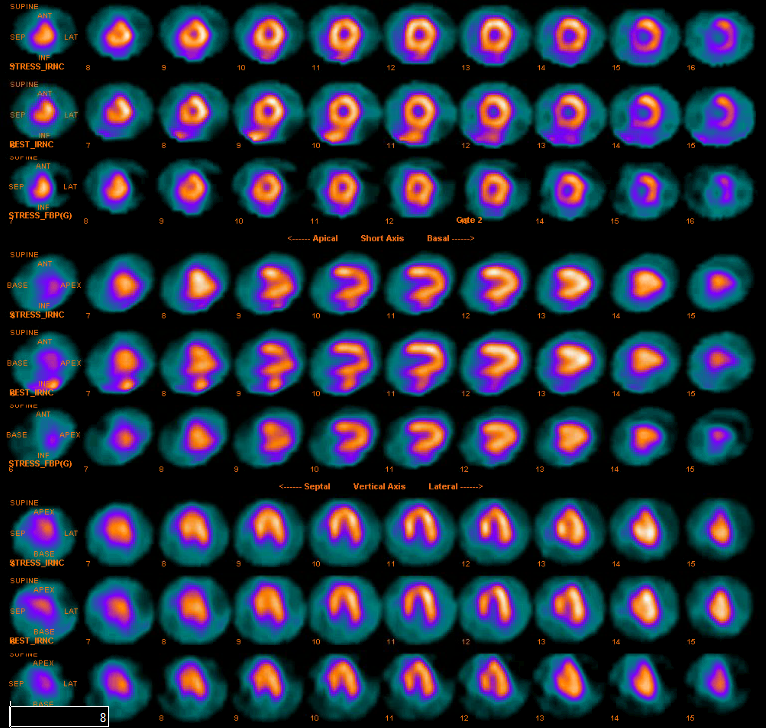 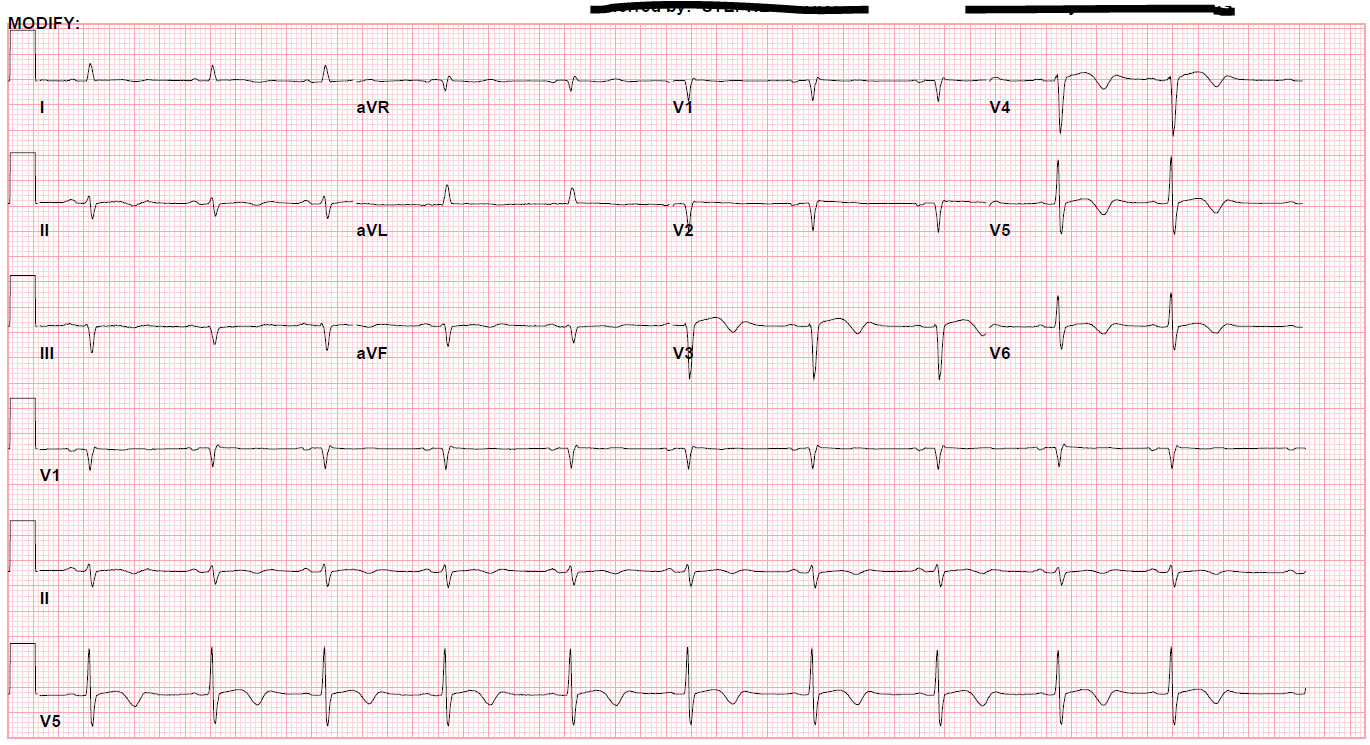 This case, presenting with what appeared to be a non-ST segment elevation myocardial infarction, became significantly more complicated when findings of progressive neurological deficits were noted. Although uncommon, left ventricular dysfunction with wall motion abnormalities are occasionally appreciated with SAH. However, this patient presented with an inverse form of NSM in which her mid left ventricular segment showed dysfunction in addition to her anterior and anterolateral walls, while the apical segment wall motion was preserved. Notably, she did not endorse headache at any time, which is the primary complaint in ninety-seven percent of patients with SAH.9

Electrocardiographic changes included T wave inversions, ST segment deviations, and QT prolongation, which commonly occur in SAH, although concomitant left ventricular wall motion abnormalities and evidence of myonecrosis are rarely observed. In a case series of patients with SAH at University of Michigan Hospital from 1996 to 2001, four out of 105 patients demonstrated reversible left ventricular systolic dysfunction, electrocardiographic changes, and elevated cardiac biomarkers.10 Left ventricular dysfunction is also seen rarely with other acute neurological illnesses such as status epilepticus and Guillain-Barre Syndrome.11 In all cases, catecholamine toxicity associated with neurological injury appears to play a causative role and mimics the presentation of stress-induced cardiomyopathy, otherwise known as Takotsubo Cardiomyopathy.12 This form of transient ventricular “stunning” is well-described in other forms of vascular injury such as myocardial infarction following reperfusion or exercise-induced angina and may be associated with regional vasospasm.13 However, left ventricular dysfunction in NSM is not associated with obstructive coronary artery disease and is typically reversible within days to weeks.14 Medical therapy may be directed at mitigating cardiogenic shock and its effect of cerebral hypoperfusion in SAH. Augmentation of cardiac output with intra-aortic balloon counterpulsation, vasopressors, and inotropes has also been reported.15 Although rare, NSM can present diagnostic and therapeutic challenges that may significantly alter patient outcomes. As a reversible cardiomyopathy, therapy should be organized to support management of the primary neurological diagnosis.