Femoral Osteochondroma Formation in a Division I Male Basketball Player: A Case Report

Osteochondromas are the most common benign bone tumors that typically occur in the metaphysis of long bones. These lesions are typically asymptomatic and first develop in childhood or adolescence. Twenty-one year old, Division I male basketball player presented with unresolved medial thigh pain after a collision during a basketball game. He was diagnosed with a femoral osteochondroma via x-ray, which was surgically excised secondary to pain. This case was unique due to the rarity of this condition, the differential diagnosis at a young age, and the lack of symptomatic complaints for ten years. Athletic trainers should consider previously asymptomatic osteochonromas with unresolved quadriceps pain. Osteochondromas are infrequent, but should be monitored closely due to the long-term effects that they can cause. Patients should consider the risks and benefits of excision to determine whether conservative treatment or surgical excision would be more beneficial.

Osteochondromas, or exostoses, are the most common benign bone tumors, accounting for up to forty percent of all benign bone tumors and occurring in approximately one percent of the population.1,2 These lesions consist of a bony outgrowth that can appear in all bones, but are most common in the metaphysis of long bones such as the femur or humerus and less often in other long bones such as the scapula, pelvis or ribs.3 The majority of osteochondromas occur as solitary tumors (90%), with some that may occur as multiple tumors in the form of multiple osteocartilaginous exostoses or multiple hereditary exostoses (MHE).1 Osteochondromas are typically asymptomatic bony protuberances first noticed in childhood or adolescence, but are rarely present at birth.3,4 These radiological manifestations usually develop gradually and may persist to grow slowly after closure of the growth plates.4

These lesions are typically discovered incidentally, although complications are reported to occur in four percent of the population.2 Complications that may occur secondary to osteochondromas are neurologic compromise, growth abnormality, or malignant degeneration to chondrosarcoma.5 Some lesions may also produce vascular compromise complications such as pseudoaneurysm, claudication, acute ischemia, and phlebitis. According to Marc-Antoine and colleagues, the development of osteochondromas could also involve compression of the surrounding tissues, as well as perforation of the arterial wall due to the chronic pulsation of an adjacent vessel on a bony spike.3

This report describes an unusual case of an osteochondroma that was initially diagnosed as myositis ossificans at the age of 11 but did not develop complications until the patient sustained a secondary injury ten years later.

A twenty-one year old Division I male basketball player reported to the athletic training room with complaints of pain after being hit in the medial thigh area during a game the night before. The initial diagnosis consisted of a bone bruise due to the impact of the opponent’s knee hitting his medial thigh during the play. After approximately two weeks of conservative treatment, the patient reported that the pain was persistent and not decreasing. He had a previous history of contusions with the pain typically disappearing within a week, so the patient was concerned with the unresolved pain. Upon re-evaluation, an obvious palpable mass was felt over the area and the athlete was referred to the team physician for evaluation and radiographic films. Previous history revealed a differential diagnosis of myositis ossificans at the age of 11. The family and patient opted out of the removal process at that time due to the negative long- term effects of the lesion growing within the growth plate of the femur.

The patient presented to the Surgery Center and obtained radiographic films of the area, that revealed an osteochondroma protruding off of the anteromedial portion of the femur on the right distal thigh. Radiographs performed ten years prior revealed the same deformity; however, the mass was approximately 5 times smaller at the age of 11. The patient described no other related issues up until the time of the basketball injury.

The patient elected to have the osteochondroma surgically removed. The mass protruded with a narrow stalk proximally from the anteromedial femur. The patient was taken to the operating room, was administered anesthesia, and placed in a supine position. A longitudinal incision was made over the distal portion of the mass and a subvastus approach was bluntly dissected down where the stalk was sectioned using an osteotome. After sectioning, the mass was then mobile and was removed. There was a small protruding sharp edge that was removed off of the femur using a rongeur, but the majority of the ridge was smooth and not excised. The wound was lavaged and closed and the patient was taken to recovery in good condition. Image one depicts the size and shape of the osteochondroma. The removed mass was analyzed and demonstrated that the proximal portion was covered with a cartilaginous cap and had no significant soft tissue attachments. 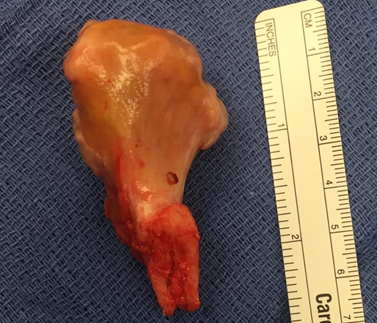 The patient was given a 3-6 week recovery period, in which a follow-up visit was scheduled for 10 days after the surgery. The patient was released full weight-bearing with a plan to initiate modalities, range of motion exercises, and light strengthening exercises with an athletic trainer. The patient had no pain limitations but was given a full week off from weights and all basketball activities. During that week, the patient’s rehabilitation consisted of gait training, range of motion exercises between 60-90 degrees, exercises to reduce swelling and discoloration, and general strengthening of the lower extremities. Pursuant to 10 day follow-up appointment the patient was released in good condition, with only ecchymosis noted on the posterior hamstring area and down the calf from the disseminating hematoma. He was instructed to progress activities as symptoms allowed. The patient continued rehabilitation exercises consisting of range of motion exercises up to 120 degrees, biking, jogging, back pedaling, and shooting, along with full clearance in the weight room.

Osteochondromas are a rare sighting in the athletic population, however athletic trainers need to be aware of the signs and symptoms a patient could present or, as in our case, be aware of past medical history that revealed a similar but different diagnosis. Excision of these benign bone tumors has been recommended in cases in which the offending lesion is painful, continues to enlarge, occurs in the vicinity of a vessel, interferes with the joint, or if there is evidence of a fracture of the osteochondroma.1 However, surgical options are generally postponed until skeletal maturity and patients need to counseled pre-operatively regarding the two percent reoccurrence rate following surgical removal of the lesion.2 The patient in this study benefited from surgical excision and was in full recovery to return to play in less than four weeks. Due to the one percent occurrence rate and the unique findings within our case, athletic trainers can use this report to gather treatment guidelines to benefit them in their practice, whether in the clinical or traditional setting.

Osteochondromas are an infrequent but important cause of musculoskeletal presentations, particularly in patients presenting with such symptoms around the second decade of life.2 Although not in this case, osteochondromas have been shown to cause long term effects in younger patients. When considering conservative treatment versus surgical excision, patients must be cognizant of age, skeletal maturity, and the small reoccurrence rate that may accompany surgical excision.

Verbal consent was obtained from the patient for publication of this Case Report and any accompanying images.