Ductal Adenocarcinoma of the Pancreas: a Delayed Diagnosis and Unlikely Surgical Candidate.

Ductal adenocarcinoma of the pancreas is the most common malignant tumor of the exocrine pancreas and accounts for greater than 90% of pancreatic malignancies.1 Pancreatic cancer is an insidious entity, which is commonly asymptomatic until late in the disease course. The most common clinical signs and symptoms are progressive jaundice, weight loss, abdominal pain, and back pain.2 Common laboratory findings include disturbances in liver function tests indicative of biliary obstruction as well as elevated tumor markers, such as CA 19-9, CEA, and CA 242. Imaging is an important component of the diagnosis; with Computed Tomography (CT) commonly showing a poorly marginated, hypo-attenuating, non-enhancing pancreatic head mass with adjacent structural invasion. Surgical resection with pancreaticoduodenectomy or regional pancreatectomy is the only potentially curable treatment; however only 15 to 20% of patients are candidates due to late presentation with local vascular invasion and/or metastatic disease. We report a case of a 48-year-old female with an atypical clinical presentation that was treated for other causes without success, who ultimately presented with duodenal obstruction secondary to a pancreatic head ductal adenocarcinoma. Prognosis is poor - overall survival is less than 10% and less than 5% survive five years without surgery. The patient was a surgical candidate and had a pancreaticoduodenectomy for treatment of the disease

This case study illustrates the atypical clinical presentation, diagnostic evaluation, and therapeutic intervention of a patient with pancreatic ductal adenocarcinoma.

A 48-year-old Caucasian female presented to the hospital with chief complaints of acutely worsening weakness, epigastric pain, intractable nausea/vomiting, and aphagia. These symptoms were present for approximately four to five months. The patient endorsed a forty-five pound weight loss over a six-month period. Previous workup included an abdominal radiograph and a right upper quadrant ultrasound for abdominal pain and weight loss, which were negative. An esophagogastroduodenoscopy (EGD) was performed, which was incomplete secondary to retained gastric contents. Colonoscopy was subsequently performed revealing a benign polyp. The patient was treated for gastritis and duodenitis, and a laparoscopic cholecystectomy was performed for biliary dyskinesia two months after the initial onset of symptoms. The patient's symptoms persisted following these treatments. A subsequent CT of the abdomen and pelvis (with IV and oral contrast) was performed two months after the patient's cholecystectomy. The CT demonstrated a massively distended stomach with concern for gastric outlet obstruction of unknown etiology. The patient was then transferred to our facility for a higher level of care. 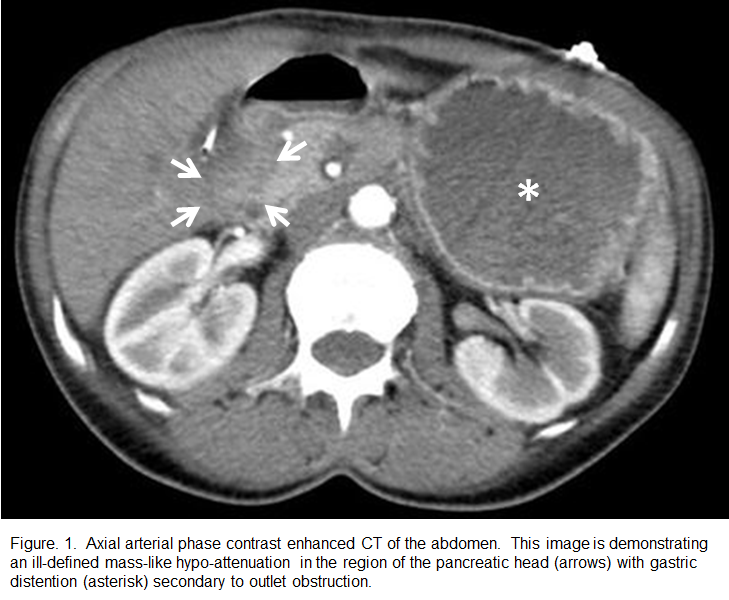 Exploratory laparotomy on the fourth day after admission revealed a golf-ball sized duodenal mass that was adherent to the head of the pancreas. A pancreaticoduodenectomy with placement of gastrostomy and jejunostomy tubes was performed. Intraoperative needle biopsies sent for frozen section demonstrated fibrous connective tissue with atypical ductal cells and invasive moderately differentiated pancreatic ductal adenocarcinoma with perineural invasion. One nodal metastasis (1/14) was confirmed on the surgical specimen (Figure 2). 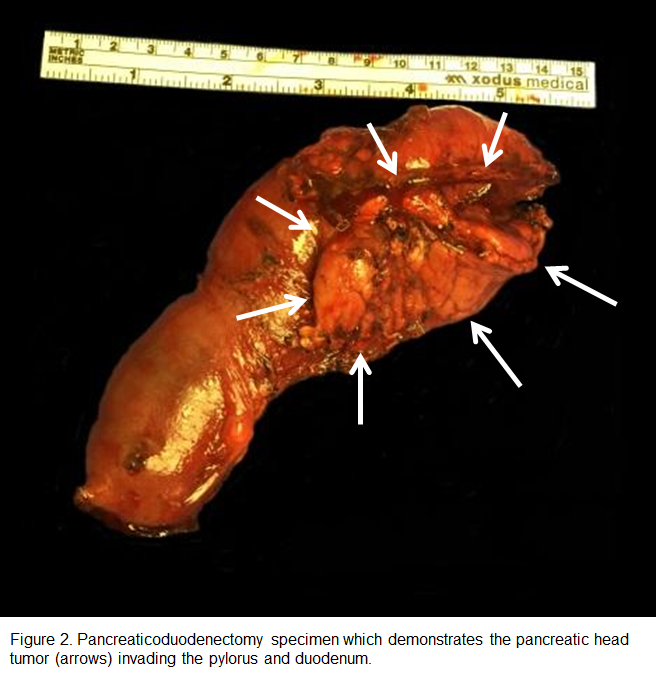 Ductal adenocarcinoma of the pancreas is the most common malignant tumor of the exocrine pancreas and accounts for greater than 90% of pancreatic malignancies.1 Tumors are most commonly located in the pancreatic head, followed by the body, tail, and diffuse involvement.3 Age at presentation is almost always after 45-years-old and peaks in the seventh to eighth decade. There is a slight male predominance and African Americans are affected more frequently than Caucasians.2 Pancreatic cancer is an insidious entity, which is commonly asymptomatic until late in the disease course. The most common clinical signs and symptoms are progressive jaundice, weight loss, abdominal pain, and back pain. Other presentations include atypical diabetes mellitus, a distended palpable gallbladder due to biliary obstruction (Courvoisier sign), or rarely migratory superficial thrombophlebitis (Trousseau syndrome) from hypercoagulability.4 Laboratory findings include elevated CA 19-9, CEA, and CA 125 tumor markers with disturbances in liver function tests indicative of biliary obstruction.5 While elevated CA 19-9 levels are not specific for the diagnosis of pancreatic cancer, it is sensitive for this diagnosis and the sensitivity for carcinoma is significantly increased in the presence of elevated CEA levels.5

Our case demonstrates an atypical clinical course for pancreatic ductal adenocarcinoma in that the patient initially presented without jaundice but with gastric outlet obstruction. Gastric obstruction is often seen later in disease progression, which was to be expected in our patient with a four to five-month history of abdominal pain and weight loss. Frequently, late presentation of pancreatic ductal adenocarcinoma demonstrates vascular involvement and therefore is usually unresectable.6 However, our patient was found to be a surgical candidate after exploratory laparotomy, ultimately undergoing pancreaticoduodenectomy.

Multiphase contrast-enhanced CT is the principal imaging modality in the evaluation of pancreatic adenocarcinoma, with an 85-95% sensitivity and specificity. A typical three-phase CT protocol for detecting pancreatic pathology utilizes 100-150 mL of low-osmolar IV contrast injected at a rate of 5mL/second via large bore (18-guage) peripheral IV. An initial non-contrast abdomen is performed with 5 mm slice thickness, utilized to locate the pancreas for the subsequent contrast enhancement. Contrast is then administered and a delay of 35-40 seconds is optimal for the initial pancreatic phase with 3 mm or less slice thickness through the pancreas. A portal venous phase is then performed with a 60-75 second delay, again with 3 mm slice thickness.7

Common findings of pancreatic adenocarcinoma on CT include a poorly marginated, hypo-attenuating and hypo-enhancing pancreatic head mass. Adjacent structural invasion presents as the loss of surrounding fat planes with infiltrating soft-tissue attenuation encroaching and/or deforming the regional viscera and vasculature. In the presence of an iso-attenuating tumor, imaging may show abnormal pancreatic architecture and contour with regional mass effect. Pancreatic and common bile duct obstruction is common and the parallel dilated ducts are referred to as the “double duct sign.” Tumors in the pancreatic body can cause upstream dilation of the main pancreatic duct with associated parenchymal atrophy. Metastases are most frequent in the liver and peritoneum.8

MRI is generally regarded as equivalent to CT in the detection of pancreatic tumors, with equivalent sensitivity and specificity, but is helpful in identifying small or CT-isointense pancreatic adenocarcinomas.9 Signal characteristics include hypo-intensity to normal pancreatic parenchyma on T1-weighted imaging, iso-to hypo-intensity to normal parenchyma on T2-weighted imaging, and reduced diffusivity with lower ADC values than the adjacent normal pancreas. Ultrasound (particularly endoscopic) can demonstrate a hypo-echoic and hypo-vascular mass with biliary ductal dilation. PET/CT typically shows intense focal FDG-avidity.

It can be difficult to distinguish pancreatic adenocarcinoma from chronic pancreatitis associated with a focal fibroinflammatory mass. Obstruction of the main pancreatic duct and common bile duct can be present in both and the entities can coexist in as many as 6% of cases.8 CA 19-9 values can also be elevated in patients with biliary obstruction.4 Elevated CA 19-9 values are most useful in evaluating postoperative surveillance for tumor recurrence.4 Also, preoperative values can provide additional information with regards to tumor staging and resectability with values of greater than 130 U/ml indicating a strong correlation with unresectability.10 Other signs of chronic pancreatitis include glandular atrophy, dilation and beading of the pancreatic duct, and parenchymal/ductal calcifications, which can all help differentiate from a pancreatic neoplasm. Metastases and lymphoma are rare and typically occur in disseminated disease. Lymphoma typically encases regional structures without causing biliary/vascular obstruction or pancreatic atrophy.8

Pancreatic ductal adenocarcinoma portends a dismal prognosis with a five-year survivability after pancreaticoduodenectomy of 25% in node-negative disease and 10% in node positive disease. Nodal status is the most important surgical prognostic indicator.11 Overall survival is less than 10% and less than 5% survive five years without surgery.

Surgical resection with pancreaticoduodenectomy or regional pancreatectomy is the only potentially curable treatment for pancreatic ductal adenocarcinoma. In the setting of unresectable or borderline resectable disease, combination chemotherapy and radiation can be utilized. Chemoradiation therapy can also be used as a single modality for palliation of pain and discomfort or as adjuvant therapy to more aggressive treatment of pancreatic cancer.11 Only 10-20% of patients are surgical candidates due to late presentation with local vascular invasion and/or metastatic disease.4

Our case is unique in that the diagnosis was initially delayed due to the work-up and treatment for biliary dyskinesia. After further evaluation with an EGD demonstrating gastric outlet obstruction, three-phase CT revealing a pancreatic head mass, and laboratory results demonstrating elevated tumor marker CA 19-9 above the reported threshold for resectability; the diagnosis of pancreatic ductal adenocarcinoma was made. Despite this delay in diagnosis and the negative prognostic indicators, exploratory laparotomy determined this case of pancreatic ductal adenocarcinoma to be resectable, leading to a potentially curative pancreaticoduodenectomy. Early and accurate diagnosis is essential in pancreatic adenocarcinoma, allowing an opportunity for surgical resection and giving the patient the best chance for survival.