Peer Assisted Learning (PAL) is a process in which students work with one another to augment classroom/laboratory instruction for skill acquisition. This study seeks to understand the influence of gender on PAL and implications this relationship has on student success. Thirty-four first year undergraduate athletic training students were placed in either same gender or opposite gender tutor pairings. They were instructed to spend as much time as necessary to fully review the skill set in a manner resembling the informal nature of most PAL interactions. Participants were asked to complete two separate Likert scale surveys that were validated by previous research on PAL, as well as indicate how much time was spent with their peer tutor. Multivariate ANOVAs lacked statistical significance on Likert scale survey questions on time spent, however time spent did reveal trends approaching significance with gender difference. Planned comparison testing indicated opposite gender interactions have more time spent than same gender interactions (p<.001, t= 14.27) with females tending to spend less time with tutors of the same gender than males (p<.001, t= 8.16). Results showed some indication that opposite gender PAL interactions lead to more time spent on task.

Peer assisted learning (PAL) is a teaching method that has been widely researched and utilized in education for its efficacy in the teaching of students.1-4 It utilizes cooperative sharing of skills and knowledge through peer interaction as a supplement to instructor-led classwork. Through assuming the role of either a tutor or a tutee, students are able to share knowledge and skill through a process known as scaffolding.5-8 This process uses knowledge and sociocultural interactions as tools to build structures and pathways within the mind to lay a foundational structure for skill development.6-8 This process and teaching method has been adopted by many different fields, including health care, as an efficient and useful tool for increasing student learning.5-27 Current and ongoing research within various health care fields 5-27, has shown that PAL increases skill acquisition beyond that of typical classroom instruction.

The theoretical basis for PAL has been attributed to Russian psychologist Lev Vygotsky8 and was created out of his sociocultural theory research. His work, as well as more recent research done on the topic, has shown that social interaction aids students in connecting old information to new information while improving skill acquisition for both the tutor and tutee.1-7 Through scaffolding, peer perspectives and individual perspectives within the learning process work in collaboration to create what Vygotsky 8 has deemed the “Zone of Proximal Development” (ZPD). This zone, creates an optimal level of instructional support between all parties involved to foster maximal learning opportunities.8-9 Previous research has deemed it necessary that the peer tutor must show a greater competence in the task in order to accurately assess outcomes10; however more recent research within the field of athletic training has shown that educational level has no effect on skill assessment.21

Current practice in health care fields supports the use of peer interactions to supplement instructor-led courses to promote critical thinking and improvement of performance at various educational levels.8-27 Previous research demonstrates that the tutees involved in peer assisted interactions have shown an increase in cognitive and psychomotor function10,15,24-25 as well as an increase in problem solving capabilities, decision making, and overall performance following tutoring.5,15-16 The PAL tutoring process has also been shown to be as helpful for the tutors as for the tutees, increasing scores on classroom based skill testing over traditional in class methods of instruction.2,10 In health care professional education, the performance and skill acquisition of peer- tutors increased through their role in the process at similar rates as seen in the tutees. 2,10

Within previous education research, contextual factors of both the individual learner and the instructor have been widely researched to determine the extent of their involvement in the process of learning.28,29 Characteristics such as gender, have been shown to produce differences in conceptualization, motivation, learning style, and learning strategies between male and female learners. 28,29 Results have varied, but variances have been attributed to the complexity between gender, gender identity, and other factors such as prior knowledge and socialization.29-31 Scaffolding, as previously mentioned, relies on social interaction between the tutor and the tutee.5-8 It is possible that the social interaction between genders can influence the learning process of both tutor and tutee. 5-8 While many have investigated the impact of PAL on tutor and tutee, little has been done to investigate the role that characteristics such as gender play on the effectiveness of PAL. This study looked to identify if students are influenced by the gender of the peer tutor and the implications this relationship has on student success.

Thirty-four first year undergraduate athletic training students (9 male, 25 female) from a large southern university enrolled in an introduction to athletic training classroom were chosen for this study as both tutor and tutee. The psychomotor skill set chosen for use as subject matter was American Red Cross CPR/ AED training for the professional rescuer. The institutional review board approved this study and a consent form was completed prior to participation.

Participants were placed in experimental groups of either working with a peer tutor of the same gender or working with a peer tutor of the opposite gender. They were assigned a set of psychomotor skills that had been incorporated into classwork. Students were instructed to take as much time as needed to fully review a given skill set, though most interactions lasted on average 15-20 minutes. The PAL interactions were scheduled independently by the students outside of class and occurred in a variety of settings to resemble the informal nature of most PAL interactions. Little structure was given to the peer tutor on conducting a tutoring session, and participants were given free rein to adopt whichever method of disseminating information that they felt most helpful to the process.

Upon completion of the peer review session(s), students completed a traditional skill assessment with the lab instructor for the course on the psychomotor skills that were being taught during their PAL interactions. Participants were then asked to complete two separate Likert scale surveys that had been validated by previous research on the topic as well as indicate how much time was spent with their peer tutor.19 Two surveys were obtained from previous research on PAL and utilized to offer a direct comparison between previous results and those obtained in this study. 19,27 These survey instruments asked participants to rate the effectiveness of such things as confidence of peer tutor in teaching the given skillset, organizational skills, and effectiveness and comfort levels with a peer tutor versus an academic instructor. 19,27 Additionally, students were asked how much time they spent with their peer tutor.

Data was collected and placed in SPSS 23.0 for analysis. Means and standard deviations were calculated for demographics and Likert Scale items. A single multivariate ANOVA was completed to determine differences with planned post hoc comparisons detailing same gender and opposite gender interactions. An alpha level of 0.05 was utilized to determine significance. 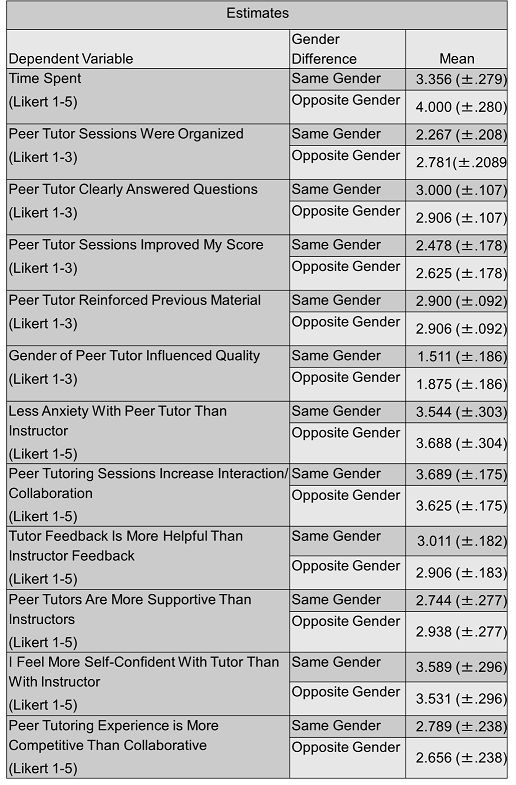 Minimal differences in peer assisted learning (PAL) interactions were found between genders on Likert scale questions. This was a difference as compared to previous research which demonstrated statistically significant results when comparisons were performed, specifically in the perceived level of comfort and effectiveness of working with a peer tutor to review psychomotor skills versus a classroom or academic instructor. 19 These differences were not determined to be significant with the data collected during this study.

An interesting result found within this research was the significant difference in time spent with peer tutor. Much of the research on time spent in relation to skill development and acquisition has shown that an increase amount of time spent engaged with the subject matter increases academic performance.32-39 This has been referred to by some as “time on task”, or the time spent actively learning or processing through the set topic.35,37,39 Further research goes on to report that time on task is a key factor within the mastery of acquired skills.37 Within this study, we utilized planned comparison testing to indicate that students in opposite gender pairings spend more time with their peer tutor than students in same gender pairings do.

In direct contrast to the results of this study, previous research on gender characteristics and mentorship has found that females tend to be more satisfied with female supervisors rather than male supervisors.40 Taking into consideration the time on task associated with increased learning, we expected to see that female-female pairings within PAL to show the greatest amount of time spent with a peer tutor. Results of this study indicated that mixed gender pairings tended to spend the most time reviewing the skillset and that female- female pairings spent the least amount of time within this PAL interaction setting.

Preliminary findings of this study support the possible idea of gender contributing to differences in scores based on the relationship between time spent and academic performance similar to previous literature, though further research is necessary to confirm noted trends as the small sample size is a large limitation of this study. The researchers also recognize that limitations exist utilizing a five item Likert scale, which could have influenced the given responses for time spent with peer tutor. Though the spacing of time given was appropriate for the study, the spacing was not identical, which could have contributed to a difference in responses. The responses given by the participants are also limited by the honesty used in reporting the given responses. There is no guarantee that outside influences did not affect the participants responses.

PAL has been shown by many different health care fields to be a valuable tool in the education of future practitioners. Previous research has been focused on the effectiveness of PAL while little to no research has focused on the characteristics of the learner, such as gender. This study sought to identify if students are influenced by the gender of the peer tutor and the implications this relationship has on student success. While the findings of this study did not yield results similar to those reported by previous researchers, planned comparison post hoc testing found a difference between same and opposite gender pairings within time spent reviewing material. While the small sample size proved to be a large limitation of this study, we encourage future research to further expand upon our findings. Through our results, some consideration should be given to the gender of the student pairings to maximize academic success with the utilization of PAL as a teaching tool.