According to the Centers for Disease Control and Prevention, at least 30 percent of the estimated 154 million antibiotic prescriptions written in doctors' offices and EDs are unnecessary, putting patients at risk for antimicrobial resistance, severe allergic reactions, and Clostridium difficile infections. 1,2 Infections due to resistant pathogens are directly associated with increased morbidity, mortality, and health care costs. A study performed by Shehab et al. estimated that 142,500 annual ED visits are made due to antibiotic related adverse effects annually, and out of the 6,614 cases evaluated in the study nearly 80% were due to allergic reactions associated with antibiotics.3 With the growing rates of antimicrobial resistance in the United States, the Centers for Medicare and Medicaid Services and the Joint Commission proposed that every hospital develop an antimicrobial stewardship program by January 2017.2 However, there is very little data on stewardship initiatives in settings such as the emergency department.4 The ED is a setting in which patients with a wide variety of infections are treated. ED physicians are constantly facing the challenges of selecting the appropriate antibiotics for unclear or unknown diagnoses. In addition, the rapid patient turnaround restricts the ED physicians from being able to select antibiotics based on antimicrobial susceptibilities.

A pilot study performed at the Oklahoma State University Medical Center (OSUMC) in Tulsa, OK identified a 13.4% error rate in 1000 prescriptions written in the ED, with antibiotics comprising the majority of those errors at 17.2%.5 Because of this study, we decided to evaluate the errors of discharge antibiotic prescriptions in more detail. The objectives of this study were to (1) evaluate the appropriateness of the antibiotic selection and dosage, and (2) identify the types of errors that occurred on ED discharge antibiotic prescriptions. The purpose of this research is to identify and describe common antibiotic discharge prescription errors that are being made in the ED setting.

This study was a retrospective chart review that used content analysis to evaluate a random sample of 1000 empiric antibiotics submitted into the electronic medical record (EMR) (Meditech 6.07) for discharged ED patients from July 1, 2015 to June 30, 2016, which captures one residency academic year. The sample of 1000 prescriptions were from charts of patients who visited and were discharged from the ED at the OSUMC during July 1, 2015 to June 30, 2016 and were written antibiotic prescriptions upon discharge. Prescribers of these antibiotics included ED attending physicians, ED resident physicians, as well as attending and resident physicians from other specialties. This facility is an academic medical center with an annual ED volume of approximately 48,000 patients.

Four investigators participated in evaluating the prescriptions for errors following training in error identification, operational definitions, coding, and other information on content analysis procedures. The investigators involved in this study included an ED clinical pharmacist, a pharmacy resident, an ED attending physician, and an ED medical resident. Each investigator reviewed 500 prescriptions, resulting in each prescription being analyzed by two different investigators. A third investigator was involved to break ties. Figure 1 provides illustration to the method of data analysis. Microsoft Excel was used to evaluate the dataset. 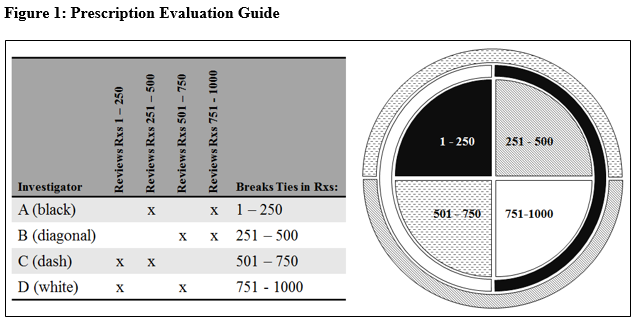 Thirteen different antibiotics were prescribed in the ED, with the most commonly written antibiotics being cephalexin (n=242), sulfamethoxazole/trimethoprim (n=190), and metronidazole (n=95) (Table 3).

This cross-sectional, retrospective chart review indicated that approximately one-fifth of the antibiotic prescriptions written upon discharge contained errors. Our total error rate of 22.2% was less than a similar study conducted in an ED in Saudi Arabia where 46.2% of antibiotic prescriptions reviewed were deemed inappropriate based on selection, frequency, dose, or duration. However, this study showed a similar discrepancy between error rates of adults and pediatrics, where the pediatric error rate was higher (57.8% versus 38.7%).6 Because of this discrepancy, numerous research studies have focused on preventing discharge prescription errors in the pediatric population. A study conducted by Condren et al. showed a pediatric prescription error rate of 9.7%, with 59% of those prescriptions with errors being anti-infectives, which gives weight to the importance of discharge prescription review in pediatric patients' antibiotic prescriptions.7 Pediatric patient dosing can be a challenge for prescribers, as it often involves weight-based dosing. In addition to calculation errors, there is an increased risk of pediatric medication errors due to variation of pediatric formulations and dosage forms. Furthermore, guidelines vary widely and often do not address every scenario encountered in the ED.8,9 Pharmacists have been utilized to decrease pediatric prescription error rates in numerous settings7, and some EDs have also benefitted from this initiative.10,11 Cesarz and colleagues describe an ED where four pharmacists reviewed the discharge prescriptions written in a 32-bed ED with an annual census of 45,000 patient visits per year over a 3 week period. These pharmacists provide 16 hours of coverage on weekdays and 8.5 hours on weekend days and were responsible for prospective prescription review as well as other EM pharmacy tasks such as clinical consultations for nurses and physicians, medication reconciliation, participation in trauma and medical resuscitations, and pharmacy resident and student teaching. They reviewed 674 discharge prescriptions, capturing approximately half that were printed during the study window and intervened on 10.1% of prescriptions, including medication optimization and prevention of medication errors.11 Condren and colleagues utilized a different model of discharge prescription review in a pediatric outpatient clinic, where orders were reviewed by a pharmacist and pharmacy students the day after they were written. Over a three-month period of time, 175 out of 3523 prescriptions reviewed were found to have an error. This retrospective approach allowed for every prescription written to be reviewed, evaluated, and intervened upon if necessary.7

EMRs can vastly improve prescription writing errors if the functionality to do so is present. A study of handwritten pediatric prescriptions from an ED by Taylor et al. found an error rate of 59%.9 EMRs can improve error rates and safety for pediatric patients as exemplified by Caruso et al. who found a much lower error rate of 1.5%.12 The error rate found in our study of 33.3% is in between these two findings which provides an opportunity for intervention and education such as utilizing an EMR with weight-based dosing capabilities. The study site EMR currently does not have the technology to identify supertheraputic or subtheraputic dosing errors, but can assist in identifying drug selection issues if a patient has an allergy to a drug entered as a discharge prescription.

The most common prescription errors were errors involving dosing below recommended range, durations outside recommended range, and dosing that exceeded recommended range. Unlike the results found in the previous pilot study performed at OSUMC5, the authors of this study found few errors involving prescriptions that were incomplete or inadequate (7.21%). This may be due to the education that was provided to the ED after the completion of the prior research. It is possible that the most frequent error, "dosing below recommended range", is due to physicians giving patients low doses/frequencies of antibiotics more for patient satisfaction rather than true medical indication (i.e. "prophylactic" doses). These unnecessary prescriptions are just one factor in the increase of bacterial resistance and can compromise patient safety due to the possibility of allergic reactions and antibiotic-associated infections.13 An example of this would be antibiotic therapy for streptococcal pharyngitis where the benefit of antibiotic therapy is often outweighed by the risk.14 Despite physicians discouraging this practice, some patients or family members of patients insist on an antibiotic prescription. Patient education tools may help increase awareness of unnecessary prescriptions, such as the Centers for Disease Control and Prevention (CDC)'s viral prescription pad; this viral prescription pad provides patient education on viral illnesses and suggestions for relieving associated symptoms.13 Another option is giving the patient a hard-copy of the prescription that can be filled if their test results come back positive.

In this study, ED attending physicians and non-ED attending physicians had the highest within-group rates of prescriptions errors of 23.2% and 31.0%, respectively and residents had the lowest within-group rates. By developing an Antimicrobial Stewardship Program (ASP) with educational seminars, all ED interns, residents and attending physicians can be reminded of the principles within the ASP including the most common infectious diseases seen in the ED and how to manage them.13,15 The format of a seminar will allow for more dialogue and therefore, increase clinician engagement, which is essential to being able to produce a positive change in practice.13 Also, the ED could provide pocket cards with the most commonly prescribed antibiotics to physicians as a reference, including common indications, appropriate antibiotics, dosing range, frequency, duration, and drug counseling points.

The medications that had the highest errors were amoxicillin, levofloxacin, and nitrofurantoin. Common errors found with amoxicillin included dosing below and above recommended ranges. Although amoxicillin is used to treat a multitude of commonly-diagnosed conditions9, pediatric dosing varies based on the indication which could have been a reason for supratherapeutic or subtherapeutic dosing. Levofloxacin and nitrofurantoin, with error rates of 40.0% and 39.4% respectively, were commonly found with errors of having durations outside recommended ranges. For example, nitrofurantoin, an antibiotic utilized for uncomplicated urinary tract infections, is usually written with a three- to seven-day supply. However, many prescriptions reviewed had greater day supply quantities, increasing the chance of resistance developing. By prescribing an appropriate duration of therapy, there is a lower potential for creating resistant bacteria without compromising patient outcomes.13

Lastly, the majority of errors occurred during the busiest times in the ED- 1100-1800. During these hours, physicians face the challenge of seeing and diagnosing their patients in a very limited amount of time, making quick decisions without consultation. As a result, implementation of an ASP can be challenging.13 Oversight and education can improve prescription error rate, which can then enhance patient safety.16

The strengths of our study include the large sample of prescriptions that were randomly selected within a wide time frame. Utilizing this time frame allowed the investigators to evaluate errors made from a variety of prescribers with different specialties and training experiences. However, limitations do exist. The error rate may have been inflated by not capturing handwritten error corrections after the prescription was printed but before patient receipt. Another limitation of the study was that the investigators of this study had to utilize their clinical judgment to decide the appropriateness of these prescriptions. The diagnosis on the chart does not always give an accurate picture of the patient, and there are extenuating circumstances where the antibiotic given may not seem appropriate when only viewed in light of the end diagnosis, thus increasing subjectivity of the determination. This study will help researchers begin developing quality improvement initiatives directed at improving antibiotic prescribing accuracy.

The findings of this study show that medication errors on ED discharge antibiotic prescriptions are a common problem, with pediatric prescriptions having a higher risk of errors than adult prescriptions. Opportunities to mitigate these risks include prescription writing oversight by pharmacists and attending physicians, and technological support like EMRs with dosage error identification. Additionally, developing an ASP in the ED would provide additional support and education to improve error prevention.

No potential conflict of interest was reported by the authors.

4. Bishop BM. Antimicrobial Stewardship in the Emergency Department: Challenges, Opportunities, and a Call to Action for Pharmacists. J Pharm Pract 2016;29(6): 556-563.

15. Dinh A, Duran C, Davido B, et al. Impact of an antimicrobial stewardship programme to optimize antimicrobial use for outpatients at an emergency department. J Hosp Infect 2017;97(3):288-293.